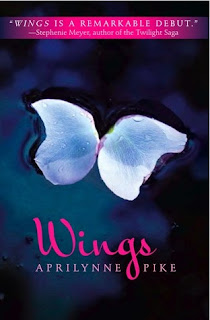 Summary:
From the author's website:
Laurel was mesmerized, staring at the pale things with wide eyes. They were terrifyingly beautiful--too beautiful for words.
Laurel turned to the mirror again, her eyes on the hovering petals that floated beside her head. They looked almost like wings.

Laurel discovers she is a faerie, sent among humans to protect the gateway to Avalon. Thrust into the midst of a centuries-old battle between faeries and trolls, she's torn between a human and a faerie love, as well as her loyalties to each world. In this extraordinary tale of magic and intrigue, romance and danger, everything you thought you knew about faeries will be changed forever.

Review:
Yes, it's another fairy story, and I swear I will eventually find a faerie/fairy novel that I'll love, cause I haven't found one yet. Wings begins with wonderful world-building and exploration of Laurel's character as readers discover who she is and gather clues that something isn't quite right with her. It starts off great but then slows with the introduction of David and Laurel's agonizing over her discovery of her flower petal "wings". Things pick up again with the introduction of Tamani, but slows again with a poorly developed antagonist and love triangle aspect. I don't think David was developed enough for me to really relate to him, he seemed one-sided and placed purely to make a love triangle. Tamani actually had a personality beyond being a love-sick puppy over Laurel. On to the things I did like though, the writing is quite nice, the scene where Laurel first discovers her "wings" is captivating. I love the set-up and the version of faerie lore the author uses, that faeries are classified by seasons rather than elements (iron, ice). Laurel is a good character and well-rounded, not annoying either. Even so, the novel just didn't wow me, it doesn't stand out as anything different from any of the other fairy novels I've read recently. Granted, this is the first book of a trilogy, so hopefully the plot and character development improves with subsequent novels, and I'm definitely interested in seeing how the story progresses.

Recommendation:
If you're into the massive amount of fairy novels that have come out recently (fairies are the new vampires), read this! Again, it didn't do much for me, but it has its good features and would probably appeal more to the type of person who's really ga-ga over these fairy stories.

Thoughts on the cover:
This cover is subtle but gorgeous, two petals arranged to look like wings floating on water. This makes sense because Laurel's "wings" are actually flower petals. Again, simple but very appealing.
Posted by Andrea at 9:22 PM