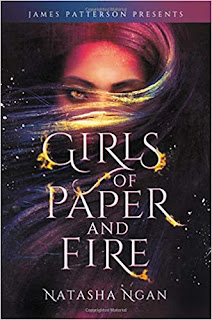 Each year, eight beautiful girls are chosen as Paper Girls to serve the King. It's the highest honour they could hope for...and the most demeaning. This year, there's a ninth. And instead of paper, she's made of fire.

Lei is of the Paper caste, the lowest class in Ikhara. Even so, rumours of her golden eyes have piqued the King's interest. and so she is ripped from her home and taken to the opulent palace, a gilded prison, her life now beholden to the Demon King's every whim.

But as Lei dreams of escape, the does the unthinkable: she falls in love. Her forbidden romance, enmeshed with an explosive plot that threatens the King's very reign, will force Lei to decide just how far she's willing to go to fight for her freedom.

Lush, poetic, and utterly unforgettable, Girls of Paper and Fire is an extraordinary tale, reminding us that pure love and passion can transcend even the bleakest of fates.

Review:
This novel has such promise to it. A fantasy land inspired by a variety of Asian cultures complete with a female Asian protagonist, class warfare between magical demons and humans, stirrings of rebellion, and an LGBTQ relationship. For the most part I enjoyed the story with the exception of a few (albeit glaring) things.

The story's world building is quite impressive. You have a fantasy realm that is inspired by a melding of several recognizable Asian cultures: Chinese, Japanese, Korean, and Indian. That same fantasy realm is inhabited by three castes: human (paper), demon (moon) and human-demon hybrid (steel), ruled over by the demon King. There's hundreds of years of political history and alliances to familiarize yourself with, and at the core you have humans oppressed by the demon upper class.

Lei, our protagonist, is sympathetic enough. With a previously captured (and presumed dead) mother, and an attitude strong enough to resist the injustices put upon her, readers generally want her to succeed and flee the situation she is in before she can be assaulted and raped by the King like the other girls.

I like the variety showcased in the book. The cultural references were fun to pinpoint and identify, all the girls had different, well-developed personalities, and I noticed how they each had an identifiable coping mechanism for their assault and rape. Lei fights back, Aoki tries to placate the King, and Chenna and Wren seem to detach and accept that this is something they just can't escape at the moment.

I also like that the novel is hopeful in that something horrific like assault and rape isn't the end of the story: that it is possible to rise above the horrific circumstances in one's life.

The things I didn't like were small, yet nagging. Lei's attraction to and subsequent relationship with Wren is an affirming example of a healthy lesbian relationship. We need more examples of affirming LGBTQ diversity in YA novels. And yet, the relationship as presented just wasn't really that believable in my opinion. When Lei suddenly admits to herself that she has feelings for Wren, there's no prior interactions with Wren or any other clues to suggest that Lei not only identifies as a lesbian, but that she even thinks of Wren in a romantic way. At that point in the story, an attraction to Aoki would make more sense, her interactions with Wren can be chalked up to curiosity and not much else.  You could read into them as attraction, but it would be a hard sell.

The whole plot thread about trying to assassinate the King starts to make less sense as it progresses. Wren is suddenly removed from the palace, so Lei is recruited to do the deed despite the fact that she's not a trained martial artist. Wren shows up anyway, so it seems like it was facilitated just to have Lei play a part in the assassination.

This book is the first in a trilogy, so I will likely give the subsequent novels a try to see if any of these issues factor in to my opinion of said books.

Recommendation:
Not as amazing as it could have been, but worth the read anyway.

Thoughts on the cover:
Just gorgeous. I love how Lei's eyes and hair has metallic accents to really make the fire in the image pop.
Posted by Andrea at 8:21 PM No comments: