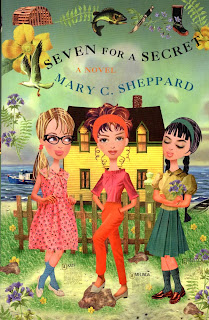 Summary:
From the author's website:
Fifteen-year-old Melinda is looking forward to spending another summer with her cousins Rebecca and Kate in the small outport village of Cook's Cove on Newfoundland's west coast. Rebecca is a goody-goody who is under the thumb of her stern mother. Kate, the city dweller, is determined not to let a boyfriend block her future. Melinda, for her part, has a tendency to act out. The cousins are like sisters, watching out for one another. When a stranger comes to the village and invites Rebecca to Boston to develop her artistic talent, the girls are suddenly exposed to the possibilities of the outside world. Melinda finds herself not only responsible for keeping family secrets but also faced with deciding just how far family loyalty should go.

Review:
This is the first title in the Tales From Cook's Cove series, chronicling young women from various generations growing up in Newfoundland. I've read the other two titles in the series, so I decided to backtrack and read the first title (the titles don't necessarily need to be read in order). This installment can be seen as a prequel to Three for a Wedding, the most recent title. Seven for a Secret covers the summer of 1960 for cousins Melinda, Kate, and Rebecca. Those same girls are later seen as middle-aged adults in Three for a Wedding. Melinda, Kate, and Rebecca are all 15 going on 16 and are faced with some tough decisions: marry young or stay in school to further their education. Melinda especially is very smart, so her mother wants nothing more than for her to go on to become a nurse. But there are secrets in the Derby family that threaten to make the girls' decisions for them. Melinda wonders why her mother never had more than three children, Rebecca wonders why a man from Boston is intent on bringing her there to further her artistic talent, and all three wonder why Rebecca's birth certificate shows a different birthdate than the one she's always known. Throughout the summer, the girls discover the truths to all these secrets and more, and those answers will change their lives.

The one thing that needs to be said about this novel more so than the other two, is that a lot of the characters' actions are defined by the time period they are living in. You cannot go into this book with a modern viewpoint and judge the girls like we judge our 15-year-olds today. Barely into the 60s, especially in a rural area like that in the book, girls got married young and many didn't finish high school; my mom told me stories about the same thing from when she was in high school in the early 70s. I can't spoil the ending for you, but there will be some actions that will unsettle some readers, so just go into this story remembering that it's rural Newfoundland in 1960, women were still expected to get married and be baby factories.

Now that I've read all three books in this series so far, I still say my favourite is One for Sorrow in terms of the type of story it tells. All the books are wonderfully written, and retain all the great dialogue that I've come to expect from a story about Newfoundlanders. I hope the author continues with this series, hopefully going back further than 1960 and after 1988, it would be nice to get all 7 planned books spanning the whole 20th century.

Recommendation:
If you're a fan of the series or just want to read a good example of Canadian YA literature, read this! Beware, there is a sex scene and mention of teenage pregnancy, so I wouldn't give this to anyone below the high school level.

Thoughts on the cover:
Thank the gods of book covers that these novels got revised covers after the change in publishers after the first book. I like the new covers much better compared to this, though the one for Seven for a Secret isn't without its charms.
Posted by Andrea at 5:41 PM