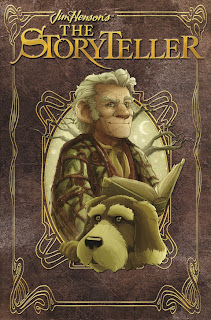 Review:
When my husband and I first got Netflix in our house, one of the titles we came across was a Jim Henson series called The Storyteller from the late 80s that neither of us had ever seen before. We adored it, it's all little vignettes based on myths and legends acted out in live action with muppets. The Storyteller figure is an old man who sits by the fireplace and reads the stories out of books, all while his muppet dog interacts with him. It's wonderful in that it's appropriate for all ages, aside from the usual violence typical of fairy-tales. In this particular graphic novel, various artists illustrate 9 different stories: Old Nick & The Peddler, The Milkmaid & Her Pail, An Agreement Between Friends, Old Fire Dragaman, Puss in Boots, The Frog Who Became An Emperor, The Crane Wife, Momotaro The Peach Boy, and The Witch Baby (the bonus story). All the stories are wonderful, so any favourites I have are as a result of the artwork, and my absolute favourite is Puss in Boots illustrated by Marjorie Liu and Jennifer L. Meyer. The panels are done in gorgeous tones of light blue and silver and it just has a wonderful ethereal quality to it. The Japanese-inspired stories are also nicely illustrated in typical Japanese styles, which I always enjoy.

This is listed as 'volume 1', so I certainly hope there are more installments, I'll certainly be picking them up if they do make any more.

Recommendation:
An excellent all-ages graphic novel that would be at home in any classroom or home library. A must for anyone that likes old-fashioned storytelling.

Thoughts on the cover:
Nice illustration of The Storyteller and his dog, i like how the outlines are recessed into the cover so there's a textured feel to it. The gold and brown colour scheme is very classical too.
Posted by Andrea at 8:01 PM No comments: 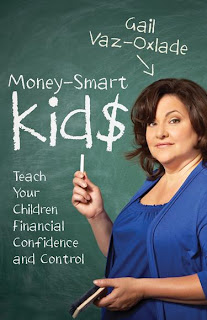 Summary:
From the publisher's website:
Want to teach your kids to see money as a tool, not a trap? Determined to help them avoid the mistakes you made?

As a parent you want the best for your kids. You work hard to provide every advantage you can. You want them to be safe, smart and healthy. Yet, when it comes to money, it’s a whole different story. If you’re like most people, you’d rather run a mile through a desert with a camel on your back than talk financial realities with your children.

Your parents told you that talking about money just wasn’t polite. Look where that left you! A healthy, balanced attitude towards money begins when kids are just toddling, so pull your head out of the sand and roll up your sleeves.

Gail Vaz-Oxlade, Canada’s #1 personal finance expert, will teach you everything your children need to know. Gail believes that building confidence and money skills starts with an age-appropriate allowance. In Money-Smart Kids, she’ll show you how to start an allowance and use it effectively to help your kids:

What better gift could you give your kids than the confidence to control their money, rather than letting their money control them? Let Gail help you raise Money-Smart Kids.

Review:
I'm a big fan of Gail Vaz-Oxlade, my husband and I end up watching her shows to make ourselves feel better about our finances, the same way we watch Hoarders to make ourselves feel better about not cleaning the house as often as we'd like. Her approach of financial planning and budgeting is very common-sense, but the one aspect that I always wanted more clarification on was money matters where children are involved. By the time I graduated high school I had a pretty good grasp of money matters, so the outcome was good but I always felt things could've gone better along the way. Now that I have my own child, I wanted to know how to better approach money with her.

I like Gail's way of dealing with money with kids. She believes in giving kids an allowance without it being attached to chores or grades since kids need to learn about money and they can't learn about it if they don't have any. I like this concept because chores should just be a given in a household, unless there's something over and above the normal ones that a child would like to do to earn extra money. She talks about making sure parents explain money matter to their kids, from where the money in the ATM comes from, to how long mommy and daddy have to work to afford certain things. She also talks about using the jar system from her show with kids: one for saving, sharing (donations), planned spending, and mad money, and allocating a child's allowance every week to each jar. I personally wouldn't use all four categories with my child, at least not right away, I would simply use saving and spending until they get the concept of savings as emergency money and have the willpower to save for something over a planned period of time (planned spending).

The chapter on credit was especially good, which I think is needed for some kids that have a hard time understanding the concept of credit cards (I didn't growing up, but I know a lot of young kids do and then have big credit card issues once they get their first card at 18).

Recommendation:
Wonderful little book for parents that want some guidance in how to teach their children about money. This is especially timely considering how many kids and young adults these days have no considerable concept of budgeting or credit.

Thoughts on the cover:
Keeps in theme with Gail's other books with the image of her, except instead of against a clear backdrop she's against a chalkboard background. The title in chalk with the $ as the s is a nice touch.
Posted by Andrea at 7:27 PM No comments: