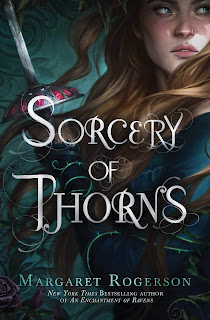 All sorcerers are evil. Elisabeth has known that as long as she has known anything. Raised as a foundling in one of Austermeer's Great Libraries, Elisabeth has grown up among the tools of sorcery - magical grimoires that whisper on the shelves and rattle beneath iron chains. If provoked, they transform into grotesque monsters of ink and leather. She hopes to become a warden, charged with protecting the kingdom from their power.

Then an act of sabotage releases the library's most dangerous grimoire. Elisabeth's desperate intervention implicates her in the crime, and she is torn from her home to face justice in the capital. With no one to turn to but her sworn enemy, the sorcerer Nathaniel Thorn, and his mysterious demonic servant, she finds herself entangled in a centuries-old conspiracy. Not only could the Great Libraries go up in flames, but the world along with them.

As her alliance with Nathaniel grows stronger, Elisabeth starts to question everything she's been taught - about sorcerers, about the libraries she so loves, even about herself. For Elisabeth has a power she has never guessed, and a future she could never have imagined.

Review:
After reading the author's first book, An Enchantment of Ravens, a few years back and finding it a worthwhile read, but not something I fell in love with, I was looking forward to reading more from this author. Sorcery of Thorns is the author's second book. Very rarely do second books impress me, whether one-shots or sequels. In regards to this second book though, I stand corrected, it is absolutely phenomenal.

The author opens with this dedication: For all the girls who found themselves in books. From that one line I was hooked. I've always wanted to read a story about a young woman whose story revolves around a library, and though I have read quite a few (that plot isn't quite as rare as you'd think), this one is by far one of the most intriguing.

Elisabeth lives in the Great Library of Summershall in the kingdom of Austermeer. As an orphan, she is in the unique position to apprentice to be a librarian, but this is no ordinary job. The books in the library, called grimoires, are sentient, teeming with magic and personality. The grimoires must be guarded properly or else they can morph into Maleficts, malignant entities that wreak havoc on humanity. When Elisabeth wakes in the middle of the night to find her warden dead and a Malefict advancing on the town, she is blamed for the incident and sent to the capital of Brassbridge to stand trial. Accompanied by sorcerer Nathaniel Thorn, both he and Elisabeth are attacked by the forces of magic, taking it upon themselves to uncover the larger plot being conducted against all the libraries in Austermeer.

The world-building is exquisite here, and unlike in the author's first book, this world and its details are satisfactorily fleshed out in the first few chapters. The idea of sentient books was a lovely one, I adore the few scenes of Elisabeth interacting with the books, handling them with the care one would bestow on the elderly or a small child.

The characters, however, are what really make this novel shine. Elisabeth is sufficiently spunky and persistent, you know, your basic YA heroine, except she's not as annoying as the type usually is. Nathaniel is hilariously caustic with a traumatic backstory (plus he's bi, yay for non-token LGBTQ representation!), and his and Elisabeth's relationship is a well-developed, slow burn type of love that is realistically portrayed. Silas though, Nathaniel's demonic servant, steals the show in my opinion. His character is not only wonderfully three-dimensional, he's also the most interesting by far, to the point where I want a whole book just about Silas now.

If there is a downside to this book, I'd say that the ending feels a bit rushed and is overly convenient. This isn't really a huge detriment in my opinion, the pros well outweighed the cons here.

Recommendation:
This is must-read. The writing and world-building pulls you in, the characters are appealing (I'd argue that people read this for Silas alone), and it showcases a love of books and knowledge (plus adventure, romance, and snarky demons...what's not to love?)

Thoughts on the cover:
The same illustrator that did the cover for An Enchantment of Ravens graces us again with the cover image for Sorcery of Thorns, and boy is it pretty. The colour scheme of dark greens and blues is aesthetically pleasing, and apparently there is an alternative/special edition cover that was done in a purple colour scheme as well.
Posted by Andrea at 9:44 PM No comments: