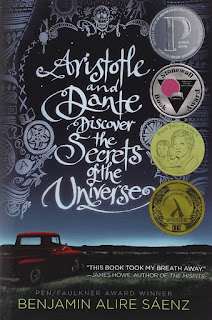 Dante can swim. Ari can't. Dante is articulate and self-assured. Ari has a hard time with words and suffers from self-doubt. Dante gets lost in poetry and art. Ari gets lost in thoughts of his older brother who is in prison. Dante is fair-skinned. Ari's features are much darker. It seems that a boy like Dante, with his open and unique perspective on life, would be the last person to break down the walls that Ari has built around himself.

But when Ari and Dante meet, they bond. They share books, thoughts, dreams, laughter. They teach each other new vocabularies and begin to redefine each other's worlds. And they discover that the universe is a large and difficult place.

This is the story about two boys, Ari and Dante, who must learn to believe in each other and the power of their friendship if they are ever to become men.

In breathtaking prose, American Book Award winner Benjamin Alire Saenz captures those moments that make a boy a man as he explores loyalty and trust, friendship and love.

Review:
The last book I reviewed, We Contain Multitudes, was often compared to Aristotle and Dante in publications and other reviews. I've been meaning to read it for years but hadn't quite gotten around to it until now. I'm disappointed that I let such a gem of a book go unread for so many years, but I'm glad I've read it now.

Aristotle "Ari" Mendoza and Dante Quintana are teenage boys growing up in El Paso, Texas in the late 1980s. The book follows the pair across a couple of years, from age fifteen to seventeen, as they grow from tentative, unsure boys to confident young men.

Ari acts as our narrator, beginning as a boy who admits he's lonely but prefers to keep to himself. With a dad dealing with the traumas of his time in the Vietnam War, and his family struggling with the ghost of his older brother Bernardo in prison, Ari has questions about a lot of things but few answers. In comes Dante like a summer storm, gently but persistently involving himself in Ari's life, even across a great distance later on in the book. Eventually the two of them discover the answers they are seeking, while discovering love for each other.

The writing is beautiful without being pretentious, and the boys themselves are very well-developed as characters as well as realistic teen boys. The novel does a good job of developing the theme of what happens when secrets fester as opposed to having open lines of communication, which we see not only through Ari and Dante but also with Ari's dad and brother.

Recommendation:
This is a beautiful book that everyone should read. Not only is it an awesome story with good themes, it also has wonderful LGBTQ and Latino/a/x representation.

Thoughts on the cover:
The night sky with Ari's truck is a great choice for a cover image, and the colour scheme is very pleasing.
Posted by Andrea at 8:10 PM No comments: