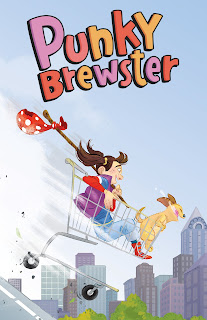 Punky Brewster has never had it easy. Scraping by on the streets of Chicago with the help of her puppy sidekick, Brandon, life could be pretty tough. But Punky's never without her sunny disposition - even after the police find her and put her into foster care. The hunt is on for a new family when she meets Henry Warnimont, a long-lost relative, and decides he's the adoptive dad for her. All she has to do is convince the foster home, the family court system, and possibly Henry himself. Luckily, she's got an unbeatable resource - her limitless reserve of...Punky Power!

Review:
I'll admit, I picked this up purely for nostalgia purposes. As an 80s child, I was very well versed in the Punky universe growing up and still watch episodes of the show on YouTube when I need a pick-me-up.

This graphic novel collects the first 8 single issues of the comic and is a stand-alone story about meeting Punky, her stint in foster care, her relationship with Henry, and navigating the family court system. I loved that the story has been updated for modern readers: Punky helps a woman steal digital cameras and tablets in exchange for food, Margaux takes selfies with her smartphone, and Punky uses a Macbook in Henry's studio. The story still retains all the elements and general feel of the original show, Punky is still that cheeky, smart kid who's resilience is astounding; and Henry is still that kind but slightly grouchy older man that ends up being the perfect family for Punky. I also like how the comic goes into more information about the foster care and adoption systems than I remember the show doing. 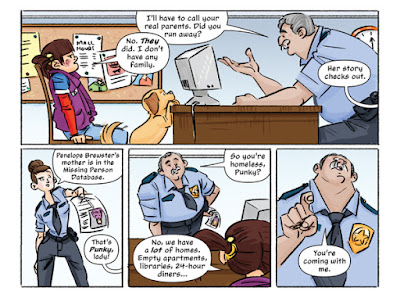 Recommendation:
Very charming and so sweet it'll give you cavities. A great kid-friendly graphic novel that's sure to please.

Thoughts on the cover:
Doesn't showcase the art very well but does capture the Punky spirit pretty well.
Posted by Andrea at 8:16 PM No comments: 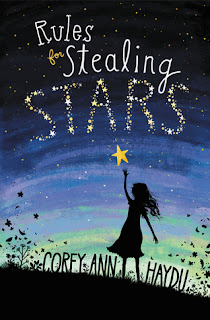 Silly is used to feeling left out. Her three older sisters think she's too little for most things - especially when it comes to dealing with their mother's unpredictable moods and outbursts. But for Silly, that's normal. She hardly remembers a time when Mom wasn't drinking.

This summer, Silly is more alone than ever, and it feels like everyone around her is keeping secrets. Mom is sick all the time; Dad acts like everything's fine when  clearly it isn't; and Silly's sisters keep whispering and sneaking away to their rooms together, returning with signs that something mysterious is afoot and giggling about jokes that Silly doesn't understand.

When Silly is brought into her sisters' world, the truth is more exciting than she ever imagined. The sisters have discovered a magical place that gives them what they truly need: an escape from the complications of their home life. But there are dark truths there, too. Silly hopes the magic will be the secret to saving their family, but she's soon forced to wonder if it might tear them apart.

Review:
This received a lot of hype, and I haven't read a good middle grade book in a while, so I decided to pick this up. Thankfully the hype is well deserved.

Priscilla is the youngest of four sisters: fourteen-year-old twins Eleanor and Astrid, twelve-year-old Marla, and eleven-year-old Silly. Their dad is a professor who studies fairy tales and folklore, and their mom is an alcoholic. After being "Away" several times for treatment but without much improvement, Silly and her sisters are forced to walk on eggshells around their mom while they spend the summer in a new home. When their mom turns her temper on the girls, the older sisters take to their rooms, leaving Silly to fend for herself. When they finally tell her what they've been up to, Silly discovers why they could spend hours in their bedrooms. The closets in their rooms are magical, some good, some bad. Marla's closet shows you what you want or need to see, Eleanor's closet makes dioramas come to life, and Astrid's closet is the one that Silly is warned not to go into, the one that will make you want to stay inside forever and fade from people's memories. When their mom deteriorates further and goes Away once again, the girls each have their own ways of coping. When one sister ventures into Astrid's closet, the rest need to find a way to make her want to come back and face reality with a renewed sense of hope.

This book was both beautiful and sad at the same time. Silly's attempts to describe and deal with her mother's behaviour are childishly simple but strangely truthful. Anyone who has experience with alcoholic or otherwise toxic family environments might actually find this triggering. The realistic portion of the story I feel was well-done, I enjoyed how all the sisters were very distinct in terms of personalities and how they reacted, even the twins were very much individuals rather than a unit. The four of them aren't great sisters in the beginning, but eventually learn from their mistakes to communicate better so that they can be there for each other in the absence of their parents. The magical aspect regarding the closets was an interesting way to give hope to the girls' situation, I think the author handled it well.

Thoughts on the cover:
Pretty and very fitting for the story.
Posted by Andrea at 8:23 PM No comments: