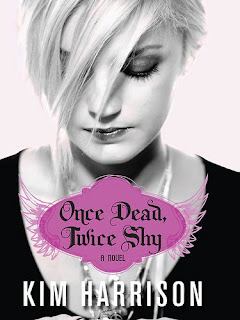 Summary:
From the back of the book:
My name is Madison Avery, and I'm here to tell you that there's more out there than you can see, hear, or touch. Because I'm there. Seeing it. Touching it. Living it.

Madison's prom was killer—literally. For some reason she's been targeted by a dark reaper—yeah, that kind of reaper—intent on getting rid of her, body and soul. But before the reaper could finish the job, Madison was able to snag his strange, glowing amulet and get away.

Now she's stuck on Earth—dead but not gone. Somehow the amulet gives her the illusion of a body, allowing her to toe the line between life and death. She still doesn't know why the dark reaper is after her, but she's not about to just sit around and let fate take its course.

With a little ingenuity, some light-bending, and the help of a light reaper (one of the good guys! Maybe . . . ), her cute crush, and oh yeah, her guardian angel, Madison's ready to take control of her own destiny once and for all, before it takes control of her.

Well, if she believed in that stuff.

Review:
This is the last of the series I started reading for the Supernatural Summer Tour, and I admit, it's a nice break from the two previous fairy-based stories. Madison starts off dead, but she still has some semblance of her body, a consequence of stealing an amulet from the dark reaper who killed her. Now she's working for a light reaper named Barnabas trying to stop dark reapers from killing other people, and finds out the dark reaper wants his amulet back and is stalking her crush to get to her. I love Madison as a character, sarcastic and punky. Plus, she died on her prom night, that's rough enough to get some empathy out of me. I wish Barnabas showed up in the book more because I loved his character, he acts like a petulant 5-year-old at times, which contrasts to Madison's calm and cool attitude. There's only one downside to this novel. As I was reading through it, I couldn't shake the feeling that there were chunks of information missing that weren't being filled in, almost as if this wasn't the first novel in the series. Turns out I was right, although this is the first novel of a series, the author contributed to an anthology collection called "Prom Nights From Hell" which introduced Madison and explained her death and the light/dark reapers. Since the author decided to start a series based on the concept after writing in the anthology, it would have been nice to include the anthology piece as an extra for this book just to get up to speed without having to buy another book just for that one anthology piece. Aside from feeling like I missed the first half of the story when I was only on page 20, the plot's mediocre once you do piece things together. I think the main reason I enjoyed the book is because I really took to Madison as a character.

Recommendation:
This isn't the best example of this particular type of supernatural story (dead but not dead), but it's got a really great protagonist, so that might be enough for some people to really enjoy the book.

Thoughts on the cover:
I'm not sure why, but I love this cover. I think it might be because we can't see Madison's eyes and her hair obscures most of her face, so all we see is this almost serene pose in black and white. I love the pink accent colour, it's shimmery without being metallic and a really nice shade of pink too.
Posted by Andrea at 8:46 PM