Summary:
From the inside cover:
Welcome to a glorious realm of mystery, magic, heroism, and danger.

In a world where a small percentage of people have an extreme skill called a Grace, King Leck's Grace allowed him to to tell lies that everyone believed.

When Bitterblue became queen at ten years old, she thought her father's murder meant the end of his violent, sociopathic influence.

The intensely anticipated companion to the New York Times bestsellers Graceling and Fire, is even more "rageful, exhilarating, wistful," and romantic. Now eighteen and believing her advisors are overprotecting her, Bitterblue begins sneaking outside the castle at night to walk the streets of her own city, disguised and alone-risking her life as well as her heart.

You don't need to have read Graceling or Fire to love Bitterblue. But if you haven't, you'll be dying to read them next.

Welcome to the Graceling Realm.

Review:
I read Graceling years ago when I first started this blog and fell in love with it. To this day I still recommend it to people. It was beautifully written, had well-rounded characters I fell in love with (including the then princess Bitterblue), and the love story between Katsa and Po is still one of the best I've read in a YA novel. I read Fire soon afterwards and enjoyed it, but not as passionately as Graceling because it was a companion novel/prequel and didn't have the same characters. Bitterblue is the sequel I've been waiting years for, and I wasn't disappointed, I'm almost glad it took two weeks to finish, it gave me time to savour it.

Bitterblue begins 8 years after the events in Graceling. Bitterblue herself is eighteen years old and has been queen since the age of ten, but is only now beginning to realize all is not right in her kingdom and her father's influence continues to spread even though Leck is long dead. When she has suspicions that her advisors are hiding things from her, she sneaks outside the castle walls at night to discover the true state of Monsea, and she doesn't like what she sees. When Bitterblue decides the only way to truly help her people is to first understand the extent of crimes committed by her father, people start dying; so she not only needs to figure out who is behind it, but also exactly what her father did that would lead people to kill to keep things quiet.

I loved the plot from the beginning. Bitterblue is now a young woman trying to not only figure out what she stands for as a ruler, but also as a person. She tries to reconcile her brief childhood under Leck's tutelage and come to terms with her mother's death by her father's hand. The politics in the book are interesting and not difficult to follow, and the social issues presented are equally intriguing (the literacy rates among her people and trying to reacquire old manuscripts Leck had destroyed during his reign. The story is very much about the search for truth and the need for it in order to move forward without repeating the mistakes of the past.

If you've read Graceling, familiar characters make reappearances in Bitterblue: Katsa, Po, Raffin, Bann, etc. The new characters introduced are essentially Bitterblue's staff from the castle: her advisors, spies, ladies in waiting (who also double as spies), guards, and citizens. Plus there's Sapphire, I have to give credit to the author for naming a character after a gemstone, it's one of my favourite naming trends. Plus Sapphire himself is just plain prickly at times, so I have a soft spot for him. The interactions Bitterblue has with the other characters (particularly Katsa and Po) are so incredibly heart-warming, strong and vulnerable at the same time. There aren't too many books in which I'm almost moved to tears by the description of a mere embrace, but the author excels in this area, as she did in Graceling.

I can't give away too much more in the way of details for fear of spoilers, but if you read Graceling, you will be dying to read Bitterblue. If you haven't read Graceling, I highly recommend you read it first (and then continue with Bitterblue) if you like high fantasy that is well written and has a good mixture of plot and character development.

Recommendation:
Bitterblue is a fantastic sequel that doesn't disappoint, with a plot that moves quickly and doesn't drag and the same brilliant characters I missed so much. One thing I should mention for those readers who are easily disturbed, there are detailed accounts of Leck's crimes later on in the book, even more detailed than in Graceling (particularly the rape of young girls), so anyone who doesn't wish to read that sort of thing might want to tread lightly. Obviously this means this isn't something you buy for someone under high school age, unless they're extremely mature readers.

Thoughts on the cover:
Of course, I love the shades of blue, it goes nicely with the yellow tones in Graceling and the shades of red in Fire. The keys make a nice frontispiece and Bitterblue's face in the background is nicely integrated, I liked how it took me a couple glances to realize I could see more than just her one eye. The  cover itself under the dust jacket is a gorgeous purple with gold lettering, I usually don't mention what's under the dust jacket, but this one is an exception because it's just so darn pretty.
Posted by Andrea at 7:03 PM No comments: 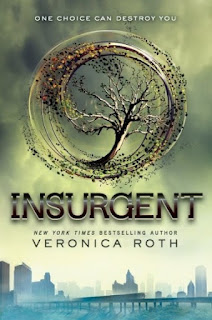 
Summary:
From the inside cover:
One choice can transform you—or it can destroy you. But every choice has consequences, and as unrest surges in the factions all around her, Tris Prior must continue trying to save those she loves—and herself—while grappling with haunting questions of grief and forgiveness, identity and loyalty, politics and love.

Tris's initiation day should have been marked by celebration and victory with her chosen faction; instead, the day ended with unspeakable horrors. War now looms as conflict between the factions and their ideologies grows. And in times of war, sides must be chosen, secrets will emerge, and choices will become even more irrevocable—and even more powerful. Transformed by her own decisions but also by haunting grief and guilt, radical new discoveries, and shifting relationships, Tris must fully embrace her Divergence, even if she does not know what she may lose by doing so.New York Times bestselling author Veronica Roth's much-anticipated second book of the dystopian Divergent series is another intoxicating thrill ride of a story, rich with hallmark twists, heartbreaks, romance, and powerful insights about human nature.

Review:
After falling in love with Divergent last year, I knew picking up Insurgent was a necessity. Insurgent picks up where Divergent left off, with Tris and Tobias in the aftermath of the Erudite attacks on Abnegation, trying to figure out how to stop Erudite from usurping everything. In the midst of escaping both Erudite forces and the traitors from Dauntless, Tris and Tobias must decide whether to save the information that Abnegation died trying to protect that is now in Erudite hands or to infiltrate Erudite and destroy it in hopes of stopping the war. Tris soon finds out that things aren't so black and white in times of conflict, that people aren't always who you think they are, and people you think you know sometimes surprise you; and decisions must be made based on personal morality rather than faction loyalty.


One thing I wished I had done before reading Insurgent was to re-read Divergent. I usually don't need to do that when going on to the 2nd book in a series, but I probably should have for this. I got my bearings back eventually, but after reading the first book a year prior, I was a little rusty regarding all the little events that culminated to the end of Divergent that get brought up in Insurgent and all the non-major characters that reappear.


Insurgent doesn't have the same breakneck action-packed pace that Divergent had, at least in my opinion, but that's because you're dealing with a more focused plot with less tangents/backstories, Divergent had to introduce a lot of concepts that come to a head in Insurgent, so it felt like something was always going on, versus in Insurgent where it seems things go a little slower. Not that it wasn't any less enjoyable for me, but the difference in the pace was noticeable.


Tris grows a lot as a character in Insurgent. She realizes that even people who aren't Divergent don't always act according to their factions, and that they shouldn't necessarily be so stuck in one mindset that defines their faction loyalty. She makes personal decisions that go against Tobias that she knows could jeopardize their relationship, but she does so anyway because she knows that its the right decision for her. We learn about Tobias and he gets a fair share of growth as well, especially regarding Tris' decision at the end of the book, it reinforced how much I like Tobias as a character. There's also a spotlight on all the factions, you get to see more of the interior workings of Amity, Candor, and Erudite, whereas in Divergent you only really saw inside Abnegation and Dauntless.


This was very much a bridge book that deals with the aftermath of the Erudite attacks and spends the entire book getting to the 'why' behind them, which leads to a spectacular ending that I didn't see coming. I believe book 3 will be amazing due to the bombshell dropped at the end of Insurgent, so I will be waiting impatiently for Fall 2013 when the final book is due for release.


Recommendation:
Didn't blow me away like Divergent did, but still a very good installment that sets the stage for what's sure to be a mind-blowing finale.


Thoughts on the cover:
I adore these covers, mostly because they feature symbols rather than cliched poses of human characters. Whereas on Divergent's cover we had the Dauntless fiery piece, Insurgent's cover has Amity's tree symbol. The cover takes it a little further by extending the branches and leaves to create a really cool swirl effect, plus with the shades of green this makes it a really impressive cover.
Posted by Andrea at 6:44 PM No comments: