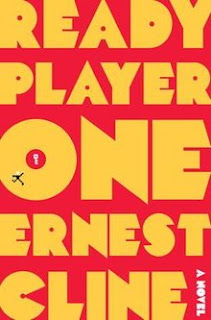 Like most of humanity, Wade Watts escapes his grim surroundings by spending his waking hours jacked into the OASIS - a sprawling virtual utopia that lets you be anything you want to be, a place where you can live and play and fall in love on any of ten thousand planets.

And like most of humanity, Wade dreams of being the one to discover the ultimate lottery ticket that lies concealed within this virtual world. For somewhere inside this giant networked playground, OASIS creator James Halliday has hidden a series of fiendish puzzles that will yield massive fortune - and remarkable power - to whoever can unlock them.

For years, millions have struggled fruitlessly to attain this prize, knowing only that Halliday's riddles are based in the pop culture he loved - that of the late twentieth century. And for years, millions have found in this quest another means of escape, retreating into happy, obsessive study of Halliday's icons. Like many of his contemporaries, Wade is as comfortable debating the finer points of John Hughes' oeuvre, playing Pac-Man, or reciting Devo lyrics as he is scrounging power to run his OASIS rig.

And then Wade stumbles upon the first puzzle.

Suddenly the whole world is watching, and thousands of competitors join the hunt - among them certain powerful players who are willing to commit very real murder to beat Wade to this prize. Now the only way for Wade to survive and preserve everything he knows is to win. But to do so, he may have to leave behind his oh-so-perfect virtual existence and face up to life - and love - in the real world he's always been so desperate to escape.

Review:
In advance of the movie coming out in March, I felt I should cover the source material since I know we'll definitely be watching the film and I want to be able to compare the two.

Wade Watts lives in 2044 in a world we helped destroy. Humanity now spends most of their time in the online world called OASIS. Through the use of virtual reality visors, haptic gloves, and created avatars, kids attend school there, businesses are run, and people can escape the bleakness of their poverty-stricken lives. James Halliday, the now deceased co-creator of the virtual world, left an Easter egg of sorts hidden within the OASIS, promising his fortune and ownership of the company to whomever can decipher the riddles and find the three keys and subsequent gates. Wade and thousands of others are gunters - egg hunters - deciphering Halliday's riddles and immersing themselves in the culture of the 1980s, the key to solving the clues. After working as a gunter for 5 years with no success, Wade finally stumbles upon the first, the Copper Key. What follows is nothing short of an engrossing adventure that certainly entertains.

I have only one real issue with the book itself. The world-building is quite well-done, Wade is a sympathetic character, most of the book moves along in a brisk fashion that rarely lags...but the one persistent feeling I had while reading this book was that it was oh-so blatantly male. At one point Wade lists off Halliday's favourite things, and the list is male dominated. I get that the feminine influence was lacking in the mainstream media of the 80s, but it wasn't completely absent. Even the John Hughes movies are categorized into male and female-oriented, and there's a scene where a fellow gunter makes fun of Wade for enjoying a movie that was targeted towards women. Halliday's friendship with Og falls apart because of a woman, there's only one female character for 90% of the book, and all the creators of the mentioned pop culture are male (I figured Madonna's music would at least get a mention in a book about 80s pop culture, but alas no). All these examples make the story seem sexist, despite the strong character of Art3mis later on. That's not to say the story isn't enjoyable because of this issue, as a female geek who was born in the early 80s I quite liked it, but I got the pervasive sense that this is exclusively male with no room for women or girls, much like how I felt growing up in the 80s and 90s until I discovered aspects of pop culture that could actually pass the Bechdel test. There is another issue about the "diversity" of the novel that I can't bring up because it is spoiler-heavy in regards to the ending.

Recommendation:
A great, engrossing story. For my only issue with it, see above.

Thoughts on the cover:
This is the original cover, the new one has an image of Wade scaling the stacks. I like the little 8-bit character reaching for the key, it's a nice little detail.
Posted by Andrea at 11:06 PM No comments: