I Am Nujood, Age 10 and Divorced - Nujood Ali with Delphine Minoui 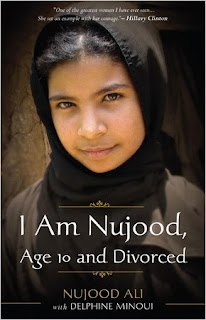 Summary:
From Amazon.ca:
“I’m a simple village girl who has always obeyed the orders of my father and brothers. Since forever, I have learned to say yes to everything. Today I have decided to say no.”

Forced by her father to marry a man three times her age, young Nujood Ali was sent away from her parents and beloved sisters and made to live with her husband and his family in an isolated village in rural Yemen. There she suffered daily from physical and emotional abuse by her mother-in-law and nightly at the rough hands of her spouse. Flouting his oath to wait to have sexual relations with Nujood until she was no longer a child, he took her virginity on their wedding night. She was only ten years old.

Unable to endure the pain and distress any longer, Nujood fled—not for home, but to the courthouse of the capital, paying for a taxi ride with a few precious coins of bread money. When a renowned Yemeni lawyer heard about the young victim, she took on Nujood’s case and fought the archaic system in a country where almost half the girls are married while still under the legal age. Since their unprecedented victory in April 2008, Nujood’s courageous defiance of both Yemeni customs and her own family has attracted a storm of international attention. Her story even incited change in Yemen and other Middle Eastern countries, where underage marriage laws are being increasingly enforced and other child brides have been granted divorces.

Recently honored alongside Hillary Clinton and Condoleezza Rice as one of Glamour magazine’s women of the year, Nujood now tells her full story for the first time. As she guides us from the magical, fragrant streets of the Old City of Sana’a to the cement-block slums and rural villages of this ancient land, her unflinching look at an injustice suffered by all too many girls around the world is at once shocking, inspiring, and utterly unforgettable.

Review:
This small biography covers the experiences of Nujood Ali, a girl from Yemen who was married in 2008 at the age of 10 to a man more than three times her age. I've always loved reading about these kinds of female rights issues ever since my mom told me the story of how my paternal grandfather reacted at the time of my birth, he refused to believe his first grandchild (me) had not been born a boy. I realized we're not immune to these kinds of things even in Canada, even in this day and age. Women and girls have to put up with all kinds of crap simply because we're female, and books like these make us explore these issues and make us aware that there are women out there that endure things that we can never imagine, and what happens when practices and traditions are blindly followed and aren't questioned.

The first thing I thought of when I finished this book was that it would be an excellent read for a law or civics class. Nujood had no record of her birth, her own parents couldn't determine her exact age, and she was married to a man in his thirties with the promise that he wouldn't do anything to her sexually until after she had reached puberty...and people think this passes for a binding contract? It's amazing that Nujood's divorce was even granted considering the stigma of the issue and the fact that she technically didn't even exist because she had no documents or papers. With a female lawyer agreeing to represent her for free and the shock to the masses of a 10 year old girl asking for a divorce because she'd been raped and beaten by a husband old enough to be her father, Nujood was granted freedom from the agreement made for her by her father.

What's interesting is to compare the issues in this book to others in the world, especially around the concept of familial honour. When my husband and I were in Japan, I had to learn a specific word that I knew to scream out in case I was ever assaulted while we were on the trains and subways. Japan has such a high incidence of sexual assaults taking place on trains that they had to start offering female-only cars. The worst thing is that women don't say anything as the assault's going on because they're in a crowded train with people all around, which makes it so ironic it's almost funny. Women wouldn't dare call attention to the fact that they're being assaulted and shame their family and possibly ruin their chances at marriage (yes, Japan is still very patriarchal). Even here women sometimes don't report assaults or abuse for fear they'll be labelled something they don't want, their names will forever be branded. Essentially you could sum up our upbringing with "don't act like a whore and shame the family". Even in my household, my father had a very specific idea of how girls should act, and I couldn't do things my male cousins of the same age were allowed to do because it "wasn't proper for a girl" and would be looked upon as embarrassing. Granted, my idea of morality is pretty simple, just as I don't like it when girls act with their boobs instead of their brain, I don't like it when boys act like man-whores either, so I may be a prude that way, but at least I'm an egalitarian prude. It's also interesting in that it's not just women who suffer in Nujood's story, her father and brothers go through some harsh experiences too, so just as women in her culture are held accountable for their sexuality, men are held accountable for other things.

Recommendation:
All in all, even though it's a really short book, it's full of debatable issues and discussion topics that are sure to strike up conversation.

Thoughts on the cover:
I never get tired of looking at pictures of this girl because she is oh so adorable. I'm glad they chose a picture of her in traditional dress because only married women dress like that, and it just brings the issue home further because you realize that she is indeed married and is obviously not even close to what anyone would consider a marriageable age.
Posted by Andrea at 9:38 PM