Sorry things have been slow, but here's my cute reason why...

First off, I apologize for the lack of reviews recently. I know I haven't been up to my usual pace, but pregnancy did a number on my eyes and by the time I had down time at the end of the day, sleep won the battle over reading ^^;

Then, on the day I posted my most recent review, I found out i was going to be induced the next day at the hospital, and my baby daughter was born the day after that ^__^

So things are going to be slow for the forseeable future until I get used to my new routine and learn to work things like reading back into my schedule, but in the meantime, here's a picture of my daughter, Anastasia, to tide you over (hopefully the cuteness will make up for the lack of reviews ^_^) 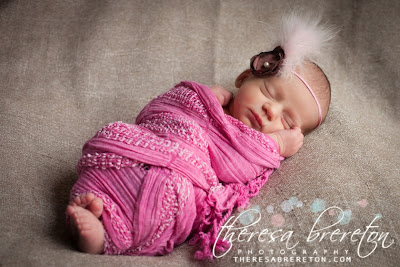 Posted by Andrea at 2:45 PM No comments:

The Son of Neptune - Rick Riordan 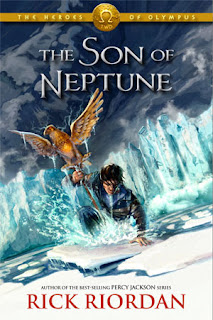 Summary:
From Goodreads.com:
Seven half-bloods shall answer the call,
To storm or fire the world must fall.
An oath to keep with a final breath,
And foes bear arms to the Doors of Death.

Percy is confused. When he awoke from his long sleep, he didn't know much more than his name. His brain fuzz is lingering, even after the wolf Lupa tol him he is a demigod and trained him to fight with the pen/sword in his pocket. Somehow Percy manages to make it to a camp for half-bloods, despite the fact that he has to keep killing monsters along the way. But the camp doesn't ring and bells with him. The only thing he can recall from his past is another name: Annabeth

Hazel is supposed to be dead. When she lived before, she didn't do a very good job of it. Sure, she was an obedient daughter, even when her mother was possessed by greed. But that was the problem - when the Voice took over he mother and commanded Hazel to use her "gift" for and evil purpose, Hazel couldn't say no. Now because of her mistake, the future of the world is at risk. Hazel wished she could ride away from it all on the stallion that appears in her dreams.

Frank is a klutz. His grandmother says he is descended from heroes and can be anything he wants to be, but he doesn't see it. He doesn't even know who his father is. He keeps hoping Apollo will claim him, because the only thing he is good at is archery - although not good enough to win camp war games. His bulky physique makes him feel like an ox, especially infront of Hazel, his closest friend at camp. He trusts her completely - enough to share the secret he holds close to his heart.

Beginning at the "other" camp for half-bloods and extending as far as the land beyond the gods, this breathtaking second installment of the Heroes od Olympus series introduces new demigods, revives fearsome monsters, and features other remarkable creatures, all destined to play a part in the Prophesy of Seven.

Review:
Althought I haven't been nuts about Riordan's other current series, The Kane Chronicles, after reading The Lost Hero earlier this year, the first book in the new series continuing the Percy Jackson story, I found this was one sequel series done right.

The Son of Neptune picks up on the other end of the spectrum from The Lost Hero. In The Lost Hero we see Jason who's originally from the Roman camp go to Camp Half Blood in the place of Percy, who has gone missing, and lead the new group on their quest. In The Son of Neptune, we finally get to see Percy and where he's gone, which is to the Roman camp (can't remember a thing, just like Jason) to lead the new group from the Roman camp on their own little side quest. I love the additions to Percy's group this time around, Hazel and Frank. Hazel is biracial (her mother was black) and Frank is Canadian (wooooot!), from Vancouver, specifically of Chinese background. I like how the author is trying to inject a little more multicultural influence into the newer series (biracial characters, different ethnicities), it's really nice to see. Although I liked Hazel's story, I really took to Frank's, i felt for the poor guy.

I can't say a lot about the plot for fear of spoilers, but I can say that if you liked the original Percy Jackson series or if you've already read The Lost Hero and liked it, it's a no brainer that you'll like The Son of Neptune.

Recommendation:
Excellent continuation in this new series, if you liked the previous installments, you'll love The Son of Neptune.

Thoughts on the cover:
A little more dynamic than the cover for The Lost Hero, I like it.
Posted by Andrea at 5:22 PM No comments: