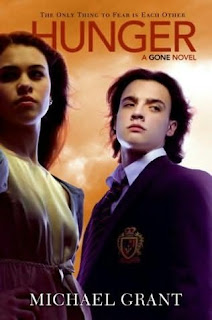 Summary:
From the publisher's website:
It's been three months since everyone under the age of fifteen became trapped in the bubble known as the FAYZ.

Three months since all the adults disappeared.

Food ran out weeks ago. Everyone is starving, but no one wants to figure out a solution. And each day, more and more kids are evolving, developing supernatural abilities that set them apart from the kids without powers.

Tension rises and chaos is descending upon the town. It's the normal kids against the mutants. Each kid is out for himself, and even the good ones turn murderous.

But a larger problem looms. The Darkness, a sinister creature that has lived buried deep in the hills, begins calling to some of the teens in the FAYZ. Calling to them, guiding them, manipulating them.

The Darkness has awakened. And it is hungry.

Review:
After reading the first book in the series, Gone, I had hoped that the sequels would be just as good as the first one (I tend to get disappointed with series when the first one is amazing and the second or third one doesn't deliver). I didn't have to worry about that, Hunger is just as good as Gone, possibly even better. The Gone books rely heavily on plot, which is good because when the series is planned on being 6 books (3 already out), the plot has to be enough to carry the books alone. Not only is the plot wonderful and fast-paced, there are several perspectives happening all at once (Sam might be doing something with one group of kids, Lana's off in another area, Astrid's in Perdido Beach etc.). The constant switch from one group to another makes it easier to develop the characters, surprisingly. These novels have quite a few characters and they're all very well developed. Sam is under severe stress from all the demands placed on him, Astrid secretly hates having to take care of her autistic brother, Albert wants to improve life in the FAYZ and sees beyond the immediate concerns, Caine is still a power-hungry bastard, but loves Diana in his own way. Everyone can identify with at least one character, and you want to see how your character pulls through to the end, if they do (yes, characters will actually die).

Hunger is appropriately titled since it is the main theme of the novel. The kids are all happy to follow Sam's orders so long as they're all fed and happy. Once the food supply runs out, kids start getting desperate; the line between "freaks" and "normals" is starting to show, and of course there's the Darkness that starts calling out to certain kids, begging to be fed. This book has a darker undertone than Gone did, much much darker. Kids in the FAYZ start killing each other's pets when food runs out, the "normals" start attacking the "freaks" with the intent to kill, the mutated creatures the uncover are more and more deadly, and the Darkness hidden in the mine can control the children's minds and make them do his bidding. In my Gone review, I likened it to a modern version of The Lord of The Flies, but if you thought Lord of the Flies was gruesome, then don't read Hunger. These kids are more than desperate, and they commit almost every single horrible act you can think of short of cannibalism and rape (I'm just waiting for the older kids to resort to rape). The FAYZ is a microcosm for the adult world. Under the right circumstances, any good person can do horrible things that we can barely imagine, and Hunger illustrates this perfectly, sometimes to the discomfort of some readers. Some people won't be able to read this through, especially since it's children committing these deeds against other children, and I say again, Hunger makes The Lord of the Flies look like a kindergarten teacher in a Christmas sweater. If you can get past that though, you're in for a really thought-provoking read. Sam faces a lot of challenges as a leader, the main one being that he needs to order kids to work in order to harvest the last of the food in the FAYZ before it rots in the fields. The kids are reluctant to say the least, and expect Sam to solve all their problems without doing their part to contribute. It raises some good discussion points on what a good society needs to function.

Recommendation:
If you can get past the violence, you're in for a wonderful book, probably one of the best series I've read this year.

Thoughts on the cover:
It's good to see the continuation from Gone's cover. Just like Caine and Diana were on the back cover of Gone and Sam and Astrid were on the front, Hunger's cover features the reverse with Caine and Diana on the front. It looks like they're keeping the same theme for all the covers, every two books feature two couples that switch positions on the covers.
Posted by Andrea at 6:46 PM