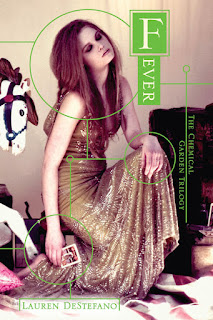 Summary:
From Goodreads.com:
Running away brings Rhine and Gabriel right into a trap, in the form of a twisted carnival whose ringmistress keeps watch over a menagerie of girls. Just as Rhine uncovers what plans await her, her fortune turns again. With Gabriel at her side, Rhine travels through an environment as grim as the one she left a year ago - surroundings that mirror her own feelings of fear and hopelessness.

The two are determined to get to Manhattan, to relative safety with Rhine’s twin brother, Rowan. But the road there is long and perilous - and in a world where young women only live to age twenty and young men die at twenty-five, time is precious. Worse still, they can’t seem to elude Rhine’s father-in-law, Vaughn, who is determined to bring Rhine back to the mansion...by any means necessary.

In the sequel to Lauren DeStefano’s harrowing Wither, Rhine must decide if freedom is worth the price - now that she has more to lose than ever.


Review:
Good news everyone, I'm still alive over here (even though I haven't blogged in almost two months). I blame real-life interferences (why it took 2 months to read a book I could polish off in 2-3 days), but I promise there will be more reviews in the near future. My daughter is now sleeping through the night, so she gives me a couple of hours to myself where I can actually relax and read again; plus I have a bunch of books arriving in early May, including Kristin Cashore's Bitterblue and Veronica Roth's Insurgent, so you can look forward to those reviews at the very least.

Anywhoo, on to Fever. After reading Wither more than a year ago and loving it to pieces, I knew this was a series I was going to follow and it was going to be one of those "good god, I need the next book NOW" series.

What I liked about Wither (the gorgeous writing, the engaging characters, the unique plot) is still present in Fever, the only downside is that Fever unfortunately falls into the category that so many second books in trilogies succumb to, what I refer to as the "bridge book". The bridge book bridges the gap between what is often the amazing beginning (1st book) and the satisfying wrap-up (the last book). Bridge books can still be quite good in their own right, but I find that not much actually happens in them, they simply set the stage for the ending.

Fever takes place right after Wither ends, with Rhine and Gabriel escaping the mansion on their way to Manhattan to find Rowan, Rhine's twin brother. They escape capture from Vaughn's lackeys, end up in the sea, find themselves a couple states away, and make their way to a strange circus to hide out. The character, Madame, that runs the strange place that doubles as a brothel reminded me of an eccentric old lady stuck in the 1960s, she was freaky yet entertaining. The circus part of the book seemed unnecessary in terms of overall plot (aside from a couple of new characters being introduced), and I actually found that the entire book doesn't really pick up pace until the last 100 pages or so (but when it picks up it gets really good, can't elaborate for fear of spoilers).

Recommendation:
If you liked Wither, you'll like Fever for the same reasons, but just beware that the plot of Fever drags on for the majority of the book and doesn't pick up until the last 100 pages or so. The ending of Fever, however, will make you wait impatiently for the final book.

Thoughts on the cover:
Same gorgeous style as used in Wither's cover (same cover model as well apparently). Where Wither used purple and black as its main colours, Fever uses green and pink. The rocking horse, tarot cards, and the model posing as Rhine wearing the fancy dress from Madame are all nice subtle touches.
Posted by Andrea at 8:27 PM No comments: