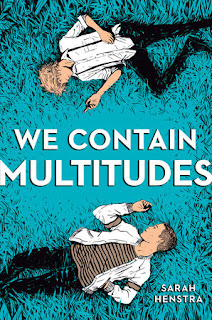 When Walt Whitman fan Jonathan Hopkirk and football player  Adam "Kurl" Kurlansky are partnered in a weekly pen pal assignment, they don't expect to get much out of it.

With each letter, however, the two are led deeper into a friendship that eventually grows into love. But faced with homophobia, bullying, and devastating family secrets, Jonathan and Kurl must struggle to hold on to their relationship - and each other.

"Do I contradict myself?

Very well then I contradict myself,

(I am large, I contain multitudes.)

- Walt Whitman, "Song of Myself"


This excerpt from Walt Whitman's epic poem is included on the first page of the book in place of a dedication or a preface (perhaps not intentionally but I thought it interesting). It serves to highlight what I think is a theme that runs through this novel: people are complicated.

Adam Kurlansky ("Kurl") is eighteen and redoing his senior year of high school. He's a star football player recently let go from the team and has a reputation for picking fights. Jonathan Hopkirk is a slight, fifteen-year-old boy passionate about Walt Whitman's poetry to the point where he even dresses like him. These two seemingly polar opposites are paired together through a shared English teacher's assignment to write weekly letters to each other.

The novel is written in epistolary format, through letters written by Kurl and Jo back and forth to each other. At first the boys' only interactions with each other are through their letters, but as time progresses Kurl and Jo eventually spend more time together at and after school, which does make the format grate a bit at times. Jo can say "oh, I want to hear your account of the same event we were both present at" all he wants, but it still gets annoying.

The novel is beautifully written, I have to come right out and say that. The language at points has the ability to make you feel like you've been sucker-punched in the gut, it's that moving. The author is an English professor in Toronto (yay for local Canadian YA lit!), so that doesn't surprise me in the least. The only thing about the writing that bugged me a bit was that since the novel is told through letters, we're supposed to believe that all this beautiful writing is actually coming from eighteen and fifteen-year-old boys. I teach teenagers, few boys (heck, even girls) are capable of this level of writing, especially at age fifteen...I'd be more inclined to believe Kurl's letters are possible coming from an eighteen-year-old, but I really shake my head at the sophistication of Jo's letters. Here's some examples:

When asked by Kurl why he continues to dress in period costumes when it just makes him a bigger target to the bullies who already harass him for being gay, Jo responds:

"I do it on purpose, because I want to be mindful of the decades and centuries behind us of people making beautiful things designed to last. I want to walk down the hallways of Lincoln High with one part of me in the eternal, the timeless, and the other part of me slipping so fast through the here and now that nobody can pin me down, not even the butcher boys" (Jo, pg. 126).

No fifteen-year-old writes like that, not even the brilliant ones that are gifted in language (unless they all attend a very exclusive private school that I could only dream of teaching at). So I went through the book thinking Jo was, essentially, a unicorn.

After Kurl and Jo admit their feelings for each other and actually discuss their relationship in their letters, Kurl describes Jo as such:

"Your scent, Jo. It's like wool and bread and something else. I don't know. A scent like if laughter had a scent, or daybreak. You filled the whole car with a yellow light like daybreak. I swear it felt like light pouring into my veins" (Kurl, pg. 188).

Again, coming from Kurl it's slightly more believable, but still not something I would assume came from a teenage boy.

When Jo is contemplating revelations about his deceased mother, Raphael, and likening them to a Whitman poem:

"More bitter than I can bear. I was remembering, just now, those suffering words from Walt. You burn and sting me. Is that how Raphael feels to Lyle and and Gloria as well as to me? The lost Raphael, the ghost of Raphael? Or is it different for those who remember her, who knew her before she was a ghost?" (Jo, pg. 358)

Again, the writing is sophisticated and beautiful. These lines were a joy to read in a YA novel, we could use more complex writing in YA books as a whole. I just think the writing would more believable if written in third person rather than in a series of first-person letters by teenaged boys.

On to the story. Kurl and Jo's romance is realistic in how it unfolds and plays out, though there are more than a few questionable instances related to consent that I wish had been better explored or called out more than they were. There is quite a train wreck of climactic events that at first appear quite out of character for both boys until you remember that these are, in fact, teenagers, and they've both been dealing with the after-effects of a boat-load of trauma. That whole "people are complicated" bit comes in handy here.

Recommendation:
This book is a real treat for language and poetry lovers; it's a beautifully written story about that hesitant first love between teenagers that also happen to be boys and the challenges that go along with that. There are some aspects of the novel that I took issue with, but they don't necessarily take away from the overall enjoyment of the piece. I highly recommend this, it has received its fair share of hype for a reason.

Thoughts on the cover:
The image of Kurl and Jo laying on the grass (perhaps inspired by the park scene?) is a nice image that intrigues without spelling out the contents of the story. The limited colour palette with a pleasing aqua/turquoise background is a nice touch.

Posted by Andrea at 4:43 PM No comments: