The Man in the Moon - William Joyce 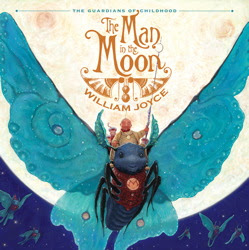 Summary:
From inside cover:

Up there in the sky.
Don't you see him?
No, not the moon.
The Man in the Moon

He wasn't always a man.
Nor was he always on the moon.

He was once a child.
Like you.
Until a battle,
a shooting star,
and a lost balloon
led him on a quest.

Meet the very first
Guardian of Childhood,
MiM, the Man in the Moon.

Review:
I've always loved picture books, especially more sophisticated ones that are beautifully illustrated. When I heard the buzz about William Joyce's Guardians of Childhood series last year, I knew I'd be buying these for my daughter.

The idea behind Joyce's series is that all the key figures from childhood stories: Santa Claus, the Tooth Fairy, the Sandman, Jack Frost, and the Easter Bunny; organized by the Man in the Moon, band together to serve children and ensure their happiness. The series is ongoing and will apparently total 13 books between two formats when finished, picture books and middle grade novels. The Man in the Moon is the first entry for the picture books (with The Sandman coming out Fall 2012). Two of the novels are out currently, plus a movie releasing for the holiday season.

This is a wonderful series to get into if The Man in the Moon is any indication. The story is whimsical and sweet (but not cavity-inducing sweet), and the illustrations are simply gorgeous. The amount of detail in the pictures is amazing: the constellations, the diagrams of the Moon Clipper ship, the maps of the moon's surface, more than I expected from a children's book.

You might not want to read this to a very young or sensitive child, there's a scene where MiM's family is essentially killed by Pitch, the King of Nightmares (though it doesn't explicitly say it, it's done in a manner similar to Bambi so it's pretty obvious), so perhaps skip this book till your child is old enough to handle a character death.

Recommendation:
Gorgeous illustrations and a wonderful whimsical story, there's no better combination for the start of this series.

Thoughts on the cover:
I love how they managed to make a bug (the Lunar Moth) look irresistibly cute, it looks like one of those Glow Worm stuffed toys but with wings. I also like the raised gold font.

How To Be a Woman - Caitlin Moran 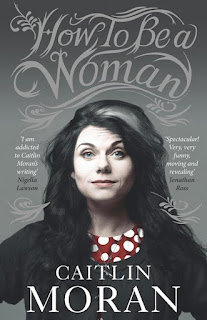 Though they have the vote and the Pill and haven't been burned as witches since 1727, life isn't exactly a stroll down the catwalk for modern women. They are beset by uncertainties and questions: Why are they supposed to get Brazilians? Why do bras hurt? Why the incessant talk about babies? And do men secretly hate them?

Caitlin Moran interweaves provocative observations on women's lives with laugh-out-loud funny scenes from her own, from the riot of adolescence to her development as a writer, wife, and mother. With rapier wit, Moran slices right to the truth-whether it's about the workplace, strip clubs, love, fat, abortion, popular entertainment, or children-to jump-start a new conversation about feminism. With humour, insight, and verve, How To Be a Woman lays bare the reasons why female rights and empowerment are essential issues not only for women today but also for society itself.

Review:
I'll admit, I don't read books like this very often. However, every once in a while when I have the urge to delve into them, a modern book on feminism is usually a good bet that I'll enjoy it on some level.

How To Be a Woman is well-structured. Each chapter begins with an anecdote from the author's life about the issue at hand, followed by observations and reflections on said issue. Moran talks about everything from menstruation and breasts to abortion and Lady Gaga (section on role models), so there's a wide variety of topics to peak anyone's interests.

This book is touted as a memoir as well as feminist observations, and the former succeeds moreso than the latter. Moran's stories from her adolescence about her quirky upbringing were absolutely hilarious, particularly those involving her prickly sister Caz. The anecdotes from her adult life were equally funny, so the book as a whole is incredibly entertaining.

The feminism part of the book unfortunately fell short in my opinion. The observations she gives are mostly run-of-the-mill and not exactly groundbreaking to the average woman. Essentially her take on it can be summed up as: don't worry about being what society says is a good 'woman' and just be a good person; and if you don't like the typical female conventions, don't participate in them. Not particularly brilliant, since women have been doing exactly this for a while (at least women in my generation have).  I will say though, that I loved her chapter on abortion. I applaud her for tackling such a touchy subject and being so raw and honest about it. The chapters about marriage and childbirth were also worth reading (from both the memoir and feminism angles), particularly about how women are often seen as less as a woman and an adult if they don't have children, I know I've encountered this mindset fairly often.

Recommendation:
Not ground-breaking feminism by any means, but incredibly funny and worth a read just for that.

Thoughts on the cover:
Typical I suppose, what else would they use other than a headshot of the author? I do like the colour scheme of black, red, and silver in the title font. I do admit that I really want a pair of the boots the author's wearing in the image on the back cover.
Posted by Andrea at 7:28 PM 1 comment: