When You Reach Me - Rebecca Stead 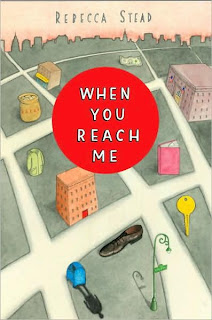 By sixth grade, Miranda and her best friend, Sal, know how to navigate their New York City neighborhood. They know where it’s safe to go, like the local grocery store, and they know whom to avoid, like the crazy guy on the corner.

But things start to unravel. Sal gets punched by a new kid for what seems like no reason, and he shuts Miranda out of his life. The apartment key that Miranda’s mom keeps hidden for emergencies is stolen. And then Miranda finds a mysterious note scrawled on a tiny slip of paper:

I am coming to save your friend’s life, and my own.
I must ask two favors. First, you must write me a letter.

The notes keep coming, and Miranda slowly realizes that whoever is leaving them knows all about her, including things that have not even happened yet. Each message brings her closer to believing that only she can prevent a tragic death. Until the final note makes her think she’s too late.

Review:
This book won the Newbery Medal for 2010, so of course, I had to pick this up. Once I got really into this book, the first thing I thought of was that this was like all the time travel episodes from the sci-fi shows my husband and I watch, just in a kid-friendly formula. This book is indeed about time travel, it even references Madeleine L'Engle's A Wrinkle in Time. In 1978, Miranda and her friend Sal live in the same apartment building, go to the same school, and have been friends since they were babies. So when Sal gets punched by a random kid on the walk home from school and suddenly stops hanging out with Miranda, she's a little upset about it. Later on when she receives a mysterious letter from an anonymous person telling her that her friend's life is in danger, she gets really scared. She receives a second letter that references 3 events from the near future, and when all of those events come to pass, Miranda realizes she's dealing with something she's only read about in books: time travel. Someone from the future has written her those letters in an effort to fix something that has yet to occur.

Thinking too hard about the concept of time travel will make anyone's brain hurt, but this novel makes it easily understood and won't have kids too perplexed. The other characters in the book are wonderful and add a great deal to the story: Miranda's mom, Richard, Jimmy the sandwich shop owner, Annemarie, Julia, Marcus, and of course, The Laughing Man. The way everything comes together in the end is quite surprising and I did not expect it; Miranda narrates the book as if she's writing a letter to the person who sent the letters, and the readers have no idea who that person is and whose life is in danger.

Recommendation:
I would definitely read this to a middle grade class, it's realistic fiction with science fiction undertones with lots of stuff going on in between, I think all kids could find something they like in this.

Thoughts on the cover:
The cover shows Miranda's neighbourhood and all the landmarks associated with it: the apartment buildings, the mailbox that The Laughing Man hides under, the school, and Jimmy's sandwich shop. There are also objects pictured that pop up in the book like Miranda's house key, her library book, her jacket, Richard's stolen shoe, and Jimmy's 2 dollar bill. The cover seems to be lacking a certain something, I know why all those items are there, but it doesn't seem to really make for a dynamic cover.
Posted by Andrea at 6:23 PM