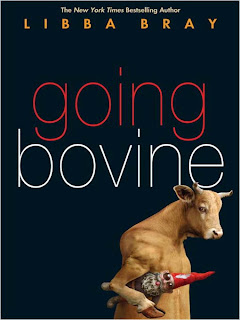 Summary:
From the publisher's website:
All 16-year-old Cameron wants is to get through high school—and life in general—with a minimum of effort. It’s not a lot to ask. But that’s before he’s given some bad news: he’s sick and he’s going to die. Which totally sucks. Hope arrives in the winged form of Dulcie, a loopy punk angel/possible hallucination with a bad sugar habit. She tells Cam there is a cure—if he’s willing to go in search of it. With the help of a death-obsessed, video-gaming dwarf and a yard gnome, Cam sets off on the mother of all road trips through a twisted America into the heart of what matters most.

Review:
After reading one Libba Bray book and hating the story (but loving how she wrote), I didn't think I'd be reading another book by her. Thankfully, Going Bovine is a completely different story from her girl-power historical fiction/fantasy series. This isn't exactly a happy book, it's funny, but not all that happy. Cameron's your normal, slacker, stoner kid. He's like a ton of kids I teach, the ones that you know have potential but don't give a care and want to get by with as little effort as possible. Then he finds out he's contracted the human variant of mad-cow disease and it's slowly going to eat his brain and kill him. Not exactly a happy waltz in the park, right? This is a testament to the author's skill, however, because she manages to take very depressing subject matter and make you forget that along the way. Cameron is in the hospital when he's visited by Dulcie, a punk angel in combat boots who tells him that the forces of evil are about to destroy the world and he needs to make his way through various locations in order to assemble the clues to stop the end of the world and locate a cure that'll save him. He teams up with Gonzo, a hypochondriac dwarf/little person that's obsessed with video games, and the two of them travel across America in search of the random clues that lead them through Mardi Gras in New Orleans, smoothie-drinking happiness cults, snow globe vigilantes, and a bunch of other wacked out things. This book is at times so absurd and funny I dare anyone not to find it at least somewhat amusing.

I love how the novel is like a modern-day retelling of Don Quixote, just with a 16-year-old kid who's brain is being eaten alive by mad-cow disease. The object of his affections is named "Dulcie" and one of the streets early on in the book is called Dulcinea (I love little things like this). For anyone who hasn't read the original Don Quixote, the woman he's chasing in his adventures is named Dulcinea, so that's where the angel Dulcie's name comes from. I also love how just like in the original story, you're not quite sure whether Cameron's completely delusional or if everything's actually happening, no matter how weird and trippy it might be. Well, I shouldn't say that, it's pretty obvious what's really going on if you're paying attention, but I suppose you can pretend not to notice if you really want the ending in suspense.

The book was a little too long-winded at times, I got the point by the middle of the book and some of the episodes after that point just didn't connect with me, so I thought the book could have been a bit shorter. The writing's fantastic, and the message that you only truly live when you give a damn about something other than yourself is beautiful. Plus, there's a yard gnome who's really the Norse god Balder...who talks...which is only one of the crazy things you'll find on your journey through this novel.

Recommendation: If you don't mind reading about a stoner kid who swears a lot and goes on the wackiest adventures ever, read this!

Thoughts on the cover:
I love the shifty-looking cow holding the demented-looking garden gnome aka Balder. That is all.
Posted by Andrea at 1:30 PM