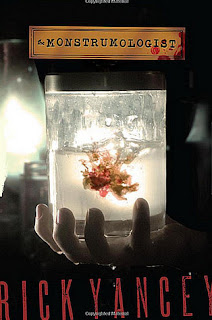 Summary:
From the inside cover:
These are the secrets I have kept.
This is the trust I never betrayed.
But he is dead now and has been for more than forty years, the one who gave me his trust, the one for whom I kept these secrets.
The one who saved me...and the one who cursed me.

So begins the journal of Will Henry, orphaned assistant to Dr. Pellinore Warthrop, a man with a most unusual specialty: monstrumology, the study of monsters. In his time with the doctor, Will has met many a mysterious late-night visitor, and seen things he never imagined were real. But when a grave robber comes calling in the middle of the night with a grueso me find, he brings with him their most deadly case yet.

Critically acclaimed author Rick Yancey has written a gothic tour de force that explores the darkest heart of man and monster and asks the question: When does a man become the very thing he hunts?

Review:
Once all the children's/teen book award winners for 2010 were announced earlier last month and found, to my surprise, that this book had won the Michael Printz award for young adult fiction, I decided to give this book some more attention. I had seen it on the shelves when it came out in the fall of 2009 but decided not to pick it up at the time. I figured it would be some more vampire/werewolf drivel that passes for psuedo-horror these days, I mean I read scarier stuff when I was in elementary school (for although I hate horror movies, I love scary novels). But, the award made me give it another go, and boy, I stand corrected. This is some of the most gory stuff I have ever read, if this ever were made into a movie they'd have to dumb down half the scenes because of the ratings!

The story begins with the author (Rick Yancey) claiming to have been given the diaries belonging to William James Henry, the oldest resident of a residential care facility. So begins the tale of Will Henry, 12 years old in 1888 and living in New Jerusalem, New England. After losing both his parents in a fire, he came to live with Dr. Warthrop, a self-proclaimed monstrumologist. Will Henry has seen a lot of strange things, but nothing prepares him for the night the local grave robber appears at the doctor's door with more than just your everyday corpse. What follows is the discovery of a monstrous species, the Anthropophagi, the mystery of how they came to a place far from their native shores of Africa, and the plot to exterminate them before they harm more of the area's citizens.

The author's writing is amazing; very gothic, yet very Victorian to match the time period. There were some slow sections where there was more description than advancement of the plot, but all in all, the writing was superb. I have to admit that for me, the whole horror aspect of the Anthropophagi themselves was delivered through descriptions of the carnage they caused rather than descriptions of how they looked. The descriptions almost made them seem comical to me, I even looked up images of the legendary monsters on Google Images to see if there was an artist that could make them seem more imposing...c'mon, how horrifying can something be when they have no head, eyes in their shoulders, and a mouth in their chest? Sounds like something a kindergartner draws. I almost wish the author had included an image of how frightening they can look, because again they just seemed comical rather than scary based on physical description alone. The true horror is in descriptions of their encounters with humans, recounted by the captain Varner, Malachi, and Will. I love the addition of Dr. Kearns (and his many names) in the middle of the book, he brings so much vileness into the story.

Recommendation:
If you like a story that scares, read this! Some scenes are quite graphic, so not for the faint of heart.

Thoughts on the cover:
I know the cover is supposed to invoke feelings of disturb and the like, but I'm not feeling it. Perhaps if I knew what was in the glass besides something that just looks fleshy and bloody I'd be slightly more scared.
Posted by Andrea at 5:45 PM