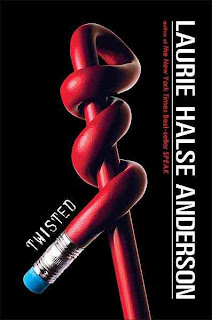 Summary:
From Amazon.com:
High school senior Tyler Miller used to be the kind of guy who faded into the background—average student, average looks, average dysfunctional family. But since he got busted for doing graffiti on the school, and spent the summer doing outdoor work to pay for it, he stands out like you wouldn’t believe. His new physique attracts the attention of queen bee Bethany Milbury, who just so happens to be his father’s boss’s daughter, the sister of his biggest enemy—and Tyler’s secret crush. And that sets off a string of events and changes that have Tyler questioning his place in the school, in his family, and in the world. In Twisted, the acclaimed Laurie Halse Anderson tackles a very controversial subject: what it means to be a man today. Fans and new readers alike will be captured by Tyler’s pitchperfect, funny voice, the surprising narrative arc, and the thoughtful moral dilemmas that are at the heart of all of the author’s award-winning, widely read work.

Review:
I've come to accept that this author could write about anything and make me want to read it, her books are just plain amazing. I like this novel particularly because it's written from the male protagonist's point of view, I find that there aren't a ton of teen novels directed towards guys, especially ones dealing with difficult subject matter such as this one. There are a plethora of books, movies, programs, etc. directed towards teenage girls and helping them be wonderful young adults and deal with the crap they encounter, but other than extremes handed out after something goes horribly wrong, I find that there aren't as many of these opportunities for our boys. I'm female, and although I admit it's really freaking hard to be a girl today, I will say that I think it's much harder to be a boy. We tell kids what we want them to be, but don't really give them any direction or instruction in how to be those things, if anything, our actions tell them the exact opposite. That's what's at the heart of Twisted, Tyler is told time and time again to "be a man", but struggles with what that means. Should he look to his dad as an example-who kisses butt in his job and lets his family come last in life? Should he look to the guys at school who are just plain idiots? Or should he live his life according to his principles even though his dad will call him a disgrace?

The first half of the book describes Tyler's rise from being invisible to being noticed due to the Foul Deed (spray painting obscenities on the school wall), and how people around him actually care about his actions since then. The popular girl in school notices him because his summer of community service has given him a hot body, the principal suspects him of every bad thing that goes on, the school bullies consider him a threat now, and his father is making him take advanced placement courses in his senior year. Tyler actually makes the right choices after the Foul Deed, he doesn't let his father's boss's son walk all over him, and he doesn't take advantage of said popular girl when she comes on to him when she's completely wasted. Yet, he still gets in trouble for them. When his father threatens to send him to military school once everything blows over, Tyler's had enough, and begins to think about killing himself. In the end, Tyler takes control of his life; stands up to the school, the bullies, and his father, and proves that he's a man by standing by his convictions and not letting any aspect of his life take advantage of him.

Like all of the author's books, the writing is just amazing; not quite as lyrical as some of her other books, but wonderful just the same. The plot moves along very quickly and the reader becomes immersed in Tyler's world. I loved his little sister, 14-year-old Hannah, she's the perfect little echo to Tyler's thoughts since she sees the same things as Tyler, and they have a great relationship as far as siblings go. I also liked Tyler's mother, she was very involved and not portrayed as a bad parent in any way. Usually in the author's books, parents are presented as people that just inhabit the same homes as their children without ever interacting with them or getting to know them enough to realize they have a serious problem.

Recommendation:
If you're interested in reading a chronicle of the modern, suburban, male teenager, read this! There are some issues like sex, drugs, suicide, and swearing that pop up, so targeted to mature readers of high school age and up.

Thoughts on the cover:
I love the twisted pencil, I used to collect weird pencils like these as a kid and would never actually use them in class for some strange reason.
Posted by Andrea at 1:01 PM