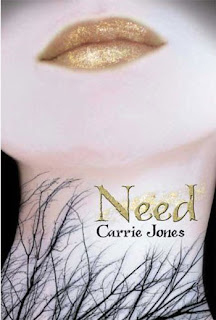 Summary:
From the author's website:
Zara collects phobias the way other high school girls collect lipsticks. Little wonder, since life’s been pretty rough so far. Her father left, her stepfather just died, and her mother’s pretty much checked out. Now Zara’s living with her grandmother in sleepy, cold Maine so that she stays “safe.” Zara doesn’t think she’s in danger; she thinks her mother can’t deal.
Wrong. Turns out that guy she sees everywhere, the one leaving trails of gold glitter, isn’t a figment of her imagination. He’s a pixie—and not the cute, lovable kind with wings. He’s the kind who has dreadful, uncontrollable needs. And he’s trailing Zara.

Review:
I think I must have masochistic tendencies to keep reading these paranormal romance books, they all start to read like bad soap operas after you've read a few. Granted, this one is not quite as bad as others I've read, but it's not something to write home about.

The plot is actually somewhat intriguing once you take away all the cliches of the paranormal romance genre (girl moves to new location, meets boy who's "different", boy protects her from the evil that inevitably befalls her etc.) Zara is sent by her mother to live with her grandmother in Maine after the death of her stepfather. Zara quickly makes friends who notice the creepy guy pointing at Zara through the cafeteria window. Since he leaves a trail of gold dust behind, and a quick Google search tells them that pixie kings leave gold dust behind, everyone immediately believes that the stalker's a pixie king who wants Zara for his queen. I know this is fantasy but, don't people usually question the existence of the paranormal before accepting it? Anyway, so Zara and her friends uncover the truth behind the pixie king, his "need", and how it relates to their sleepy little town in Maine.

I like the plot, most of the elements relating to the pixies themselves were pretty original as far as I know. There are lots of cliches for sure, but the main story is fairly safe. The romance of the novel is actually kind of sweet and not creepy like some other paranormal romance books. Zara prooves herself to be intelligent (most of the time), has a good head on her shoulders and stands up to her love interest, yay for the heroine with backbone!

And now for the annoyances. Most of the story unravels fairly quickly due to hints that may as well be giant signs on the characters' foreheads, I figured out most of the mysteries in the story before the conflict was even introduced. I felt like I was only reading on just to find out the ending, since I already figured out everything that was slowly revealed. The dialogue is very colloquial, it doesn't come off as an intelligent novel by any means, but granted, that's probably not what it's going for.

Thoughts on the cover:
I love how they incorporated the gold in as the colour of her lipstick, it makes her look like something out of a bad high school costume party, but it fits with the themes of the book, so I still like it. The way the branches don't go beyond her skin and slowly snake up towards her face is a nice touch also. The sequel continues this trend in covers as well, so they go well together.
Posted by Andrea at 11:23 PM