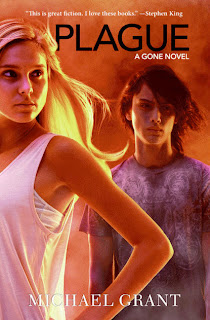 Summary:
From the inside cover:
It's been eight months since all the adults disappeared. GONE.

They've survived hunger. They've survived lies. But the stakes keep rising, and the dystopian horror keeps building. Yet despite the simmering unrest left behind by so many battles, power struggles, and angry divides, there is a momentary calm in Perdido Beach.

But enemies in the FAYZ don't just fade away, and in the quiet, deadly things are stirring, mutating, and finding their way free. The Darkness has found its way into the mind of its Nemesis at last and is controlling it through a haze of delirium and confusion. A highly contagious, fatal illness spreads at an alarming rate. Sinister, predatory insects terrorize Perdido Beach. And Sam, Astrid, Diana, and Caine are plagued by a growing doubt that they'll escape - or even survive - life in the FAYZ. With so much turmoil surrounding them, what desperate choices will they make when it comes to saving themselves and those they love?

Review:
After reviewing Gone, Hunger, and Lies last year, I knew the Gone series was a freaking knockout one. I adore these books, the author doesn't suffer from what you normally see in a series where one or two of the books are amazing while the rest just seem like fillers while you're waiting for the end. Every single novel in this series is action-packed, continues with the ongoing plot as well as subplots that are relevant, and each one is just plain amazing. Honestly, I can't recommend this series enough.

Plague, like all the previous novels, has a bunch of different events going on all at once that all come together in the end. Sam, Dekka, and Jack are sent by Albert to the north end of the FAYZ to investigate new sources of water. Sam and Astrid have a falling out over a decision regarding sex. A mysterious illness that literally causes kids to cough up their internal organs is devastating the population. A hoard of mutant bugs use the children's bodies as nesting grounds, ripping their bodies in half as they emerge. Drake/Brittney escapes from the dungeon prison and creates chaos in Perdido Beach. Astrid is trying to deal with her murderous thoughts towards her little brother. Caine and Diana are hanging out on their island paradise and not causing trouble for the most part.

The unique thing about Plague that you didn't see with the three previous novels is a bit of a deviation in the narration. The majority of the novel is still in third person that addresses each character's perspective as it focuses on each person, but you also get a first person narration from Little Pete every so often. This was really interesting since Little Pete is autistic and we've never really heard anything from his perspective before.

The main issue in Plague is of course the two plagues that the children face: the coughing sickness and the bugs that bury themselves in human bodies. This upgrades the squick factor in this novel as opposed to the previous ones, things get pretty descriptive and gruesome and there is a lot of death and general suffering. In addition you have the search for water, the development with Drake's escape and the gaiaphage, plus the subtle moral issues. I think one of the reasons I love these books so much is the issues they face: Drake/Brittney is deluded by the gaiaphage and believes it to be a god that requires a certain human sacrifice, which the characters have to admit is wrong regardless of whether a god tells them to do it or not. Astrid and Sam have the issue around sex; Astrid refuses to commit that sin but at the same time is tempted to kill Little Pete because she thinks killing him will get rid of the FAYZ...yeah, these kids have issues. Also, I was waiting for the point where the older kids would resort to rape, and it was mentioned here. Nobody actually raped anyone, but it was threatened, so things are getting more realistic. There's also consensual sex, but saying between who would be spoiler territory.

Just like the previous books, the ending will raise more questions than it answers, so yet again, I'll be waiting with bated breath for the 5th book next year, which I'm pretty sure is called 'Darkness'.

Recommendation:
This series is pure gold, it's made of so many kinds of awesome I can't describe them all. If you've read the previous three novels, then pick up Plague, it's just as good if not better. If you haven't read this series, pick up Gone, Hunger, Lies, and Plague, and read them!