Fall For Anything - Courtney Summers 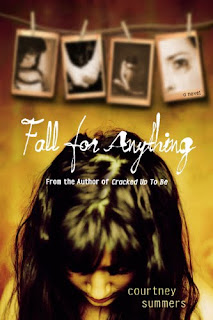 Summary:
From the back of the book:
When Eddie Reeves’s father commits suicide her life is consumed by the nagging question of why? Why when he was a legendary photographer and a brilliant teacher? Why when he seemed to find inspiration in everything he saw? And, most important, why when he had a daughter who loved him more than anyone else in the world? When she meets Culler Evans, a former student of her father’s and a photographer himself, an instant and dangerous attraction begins. Culler seems to know more about her father than she does and could possibly hold the key to the mystery surrounding his death. But Eddie’s vulnerability has weakened her and Culler Evans is getting too close. Her need for the truth keeps her hanging on… but are some questions better left unanswered?

When 17-year-old Eddie Reeves is the first one to discover her father's body after he commits suicide, it plunges her into a downward spiral of grief. Her mother shuts down, her mom's bitchy best friend takes over managing the household, and Eddie is consumed with the question "why?". When she meets Culler Evans, her father's 20-year-old photography student, they bond over their shared experiences of Eddie's father, and discover that Mr. Reeves he left a final message at the locations of the last places he photographed. They embark on a road trip to said locations to finally get an answer to why her father killed himself, and Eddie learns that sometimes, regardless of what answers we may or may not find, it doesn't change the outcome of a certain situation, and that some things are better left alone because they'll drive you crazy trying to uncover them.

The author's depiction of Eddie's and her mother's grief are remarkably well explored here. Eddie appears fine on the outside, but is so grief-stricken that those around her can't really tell how badly she's suffering. Eddie's mother shuts down and literally goes into zombie mode in a housecoat all day, so Eddie really only has her best friend Milo to rely on. I like how Milo knows details of the night Eddie found her dad and refuses to tell her because he's suffering too and doesn't want to talk about it, it shows how people can be affected by grief even though the connection to the person might not be as strong as that of a spouse, child, or relative. I love books that show the various ways people grieve a loss, I think they're necessary to show that there's no correct way to grieve and that people need to be tolerant of the ways a person can express grief. The author does a wonderful job of conveying Eddie's strong yet vulnerable voice, and even gives a well developed voice to Milo and Eddie's mom even though they don't get as much spotlight as Eddie does. Appropriate for the story, the ending isn't really resolved, cause really, there's no way to really resolve Eddie issue, but we do see her coming to terms with her dad's suicide and coming to accept what it means for her life now that he's gone.

Recommendation:
Like Some Girls Are, Fall For Anything deals with some pretty heavy stuff, but is a must-read, incredible on all counts.

Thoughts on the cover:
I like how the photography element is worked into the cover, and quite nicely I might add.
Posted by Andrea at 6:44 PM