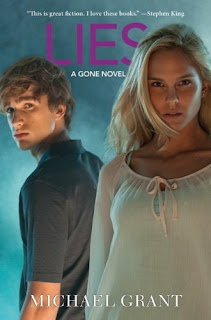 Summary:
From the publisher's website:
It's been seven months since all the adults disappeared. Gone.

It happens in one night. A girl who died now walks among the living; Zil and the Human Crew set fire to Perdido Beach; and amid the flames and smoke, Sam sees the figure of the boy he fears the most: Drake. But Drake is dead. Sam and Caine defeated him along with the Darkness—or so they thought.

As Perdido Beach burns, battles rage: Astrid against the Town Council; the Human Crew versus the mutants; and Sam against Drake, who is back from the dead and ready to finish where he and Sam left off. And all the while deadly rumors are raging like the fire itself, spread by the prophetess Orsay and her companion, Nerezza. They say that death is a way to escape the FAYZ. Conditions are worse than ever and kids are desperate to get out. But are they desperate enough to believe that death will set them free?

Review:
After reading Gone and Hunger back in May, I knew this series was golden and thanked the gods of printed material that there were 6 planned novels, so thankfully the series wouldn't be over too soon. I was also surprised that the series didn't suffer from the "crappy middle novel" syndrome that so many series have, where the first novel is completely awesome and then you get to the second one (if the series is a trilogy) or whichever installments fall in the middle if it's longer than 3 books, only to find that they suck fro various reasons. I've run into very few series that don't suffer from that, and it's always pleasant to look forward to the next release knowing that it will rock my world as much as the previous ones.

Lies is wonderfully woven, with a bunch of simultaneous events happening all at once, with equal plot lines that all come together in the last hundred pages. Sam is getting tired of the red tape of the town council, where he's asked to take care of things but isn't allowed to take steps to prevent Zil and the Human Crew from wreaking havoc. Astrid is obsessed with doing things according to the book and having rules set up in a place that doesn't really abide by any rules. Brittney seemingly returns from the dead, as does Drake, which makes everyone more than slightly paranoid. Lana is trying to keep the gaiaphage out of her mind; while Orsay is telling kids that their parents are waiting for them beyond the FAYZ wall, and that the only way to escape to the other side is by giving in to the "poof" on their 15th birthday, or through suicide.

The narration is third person, and manages to address each character's perspective so you actually get to the heart of each kid while reading...which is no easy task since there are a lot of characters to keep track of already, and more get added with every book. Just like Hunger, the title expresses the main issue of the book: someone is lying, and you need to figure out who's telling the truth before the FAYZ becomes even more chaotic than it already is. Lies takes on an atmosphere of biblical proportions, to the point where you kind of get uncomfortable reading it because you don't expect religious attitudes like that coming from 14 and 15 year olds. Astrid is disturbed by Orsay telling kids their parents are waiting for them on the other side and the only way to get there is to give into the poof or to die and they reappear on the other side. Since Astrid is uber Christian she is appalled by the idea of suicide, so she instructs the council to spread the word that Orsay is full of it in order to prevent everyone from jumping off a cliff. The town council is uncomfortable with lying, mostly because they understand the FAYZ doesn't comply with normal rules and it's possible that giving into the poof or suicide might actually be the sole way to escape. Brittney being told by her dead brother that she" is an angel of the Lord and must kill the Demon" is freaky, but is explained once you get to the end of the book. A couple characters pop out of nowhere, like Nerezza, Taylor, Sanjit, Virtue, Peace, Pixie, and Bowie. The issue of Nerezza is dealt with, but I'm assuming the others will pop up again.

The end of the book raises more questions than it gives answers, so I can't wait for book 4 (Plague) to come out next year. You finally get some kind of idea of what happened to all the adults, although you're not quite sure if it's true or not, so I figure there are going to be a lot more issues going on in future books now that the kids have a focus other than simply surviving.

Thoughts on the cover:
This cover puzzled me, mostly because it wasn't obvious who the kids on the front and back covers were. The boy on the left of the front cover is Sam for sure, cause it's the same kid from the Gone cover. The girl is another story. My first thought was Astrid, but the model doesn't really look like her, so I'm not sure. The back cover is a little easier. The boy and the girl are dirty and gritty, which makes me think the girl is Brittney and the boy is Drake, since they are described as being really dirty when they climb out of the ground after rising from the dead.
Posted by Andrea at 12:49 PM