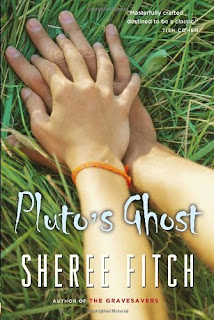 Summary:
From the author's website:
"Murderer. It's one kick in the belly of a word isn't it? Has a taste, too. It tastes like barbed wire and has wild hyena eyes. Murderer. Murder-her. Did he? Did I? That's when I remember what I want to forget."

Jake Upshore has loved Skye Derucci since before he can remember. Volatile, complex and frustrated (he's got a label disorder from all the labels he's been given) at the best of times, Jake's on a desperate quest to find Skye before she aborts the baby he believes is his. As he hurtles headlong toward certain tragedy, Jake relives the fatal choices he's made and the powerful forces that have led him to this to end. A gripping thriller and a heart-wrenching love story, Pluto's Ghost is a raw and powerful novel about anger, escape, and redemptive love.

Review:
Jake has issues. He's been labelled so many times, he's got a complex from all the labelling. His anger at the world really affects the perceptions of everyone around him, but he has a decent support system to help him out when he needs it, including his therapist Shep, his dad, and Skye. When Skye disappears with her mother and rumours abound that she's pregnant with Jake's baby and she's gone to Halifax to have an abortion, Jake resolves to find her and support her in any way he can. It's the least he can do for all Skye's done for him, being his reason for existence and everything.

I love this book purely because the author has managed to write an amazing character in Jake. He's angry, jaded, and confused; yet loving and protective of Skye, and that's a hard combination to get across in a teenage boy. As you can tell, the writing is excellent, and Jake's voice is unique and appealing. There's not a lot to the plot to be honest, but if nothing else, the book is a wonderful character study of Jake.

Recommendation:
If you like excellent writing and are big on character development, read this!

Thoughts on the cover:
Considering there's not much that you could put on this cover to really fit with the theme of the story, the hands are okay. I like how Skye's hand is on top, which corresponds to how Skye really controls Jake, not because she consciously does it, but because Jake loves her dearly and would do anything for her.
Posted by Andrea at 2:28 PM