Some Girls Are - Courtney Summers 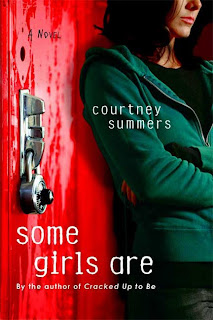 Summary:
From the back of the book:
Climbing to the top of the social ladder is hard–falling from it is even harder. Regina Afton used to be a member of the Fearsome Fivesome, an all-girl clique both feared and revered by the students at Hallowell High… until vicious rumors about her and her best friend’s boyfriend start going around. Now Regina’s been “frozen out” and her ex-best friends are out for revenge. If Regina was guilty, it would be one thing, but the rumors are far from the terrifying truth and the bullying is getting more intense by the day. She takes solace in the company of Michael Hayden, a misfit with a tragic past who she herself used to bully. Friendship doesn’t come easily for these onetime enemies, and as Regina works hard to make amends for her past, she realizes Michael could be more than just a friend… if threats from the Fearsome Foursome don’t break them both first.

Review:
This book makes your typical YA novel about bullying look like a kindergarten teacher wearing a Christmas sweater. Some Girls Are is gritty, horrifying real, and compels you to read in spite of how appalled and disgusted you are at the characters.

Regina Alfton is Anna's best friend and part of the main clique at her high school. They are the girls everyone else loves to hate, and for good reason. These girls have ruined lives, and after rumors fly about Regina and Anna's boyfriend, they decide to ruin Regina. No longer protected by her status as part of the in-group, Regina seeks the company of Michael and Liz, classmates she once helped bully. Even though Regina was merely a lackey to Anna the mastermind, she still tries to redeem herself after realizing the repercussions of her actions while getting revenge against her former friends at the same time.

Some Girls Are reminded me a little of Laurie Halse Anderson's Speak. Both novels deal with a girl who experiences a rape or sexual assault and are ostracized because of their initial reactions after said experience. Whereas Miranda in Speak literally doesn't speak and endures her pain in silence, Regina tries to plead her case to her friends and when that fails, very vocally gets revenge on the horrid acts committed against her.

I almost stopped reading this novel due to the content: pushing people down stairs, bullying to the point of suicide, essentially forcing a girl to be anorexic and take diet pills, filling lockers with rotting meat, locking someone in a closest with a person that nearly raped them, internet hate groups, not to mention all the derogatory slurs. I can only take so much pure ugly humanity until I need to stop, and these girls disgusted me constantly, including Regina. To the author's credit though, she takes a character that you really want to hate and makes you feel for her. Even though Regina's participated in some things that mark her as the lowest type of human being, she does regret what she's done (as evidenced by her inability to eat) and honestly does want to be good again. You feel compelled to read on to see not only if she survives the bullying against her, but if she betrays her new friends to save her own skin.

This book was remarkably well written. It was incredibly realistic and one of the more gritty novels I've read. Some Girls Are shows exactly how bad girls can get when it comes to bullying, you could almost use this as a study of human nature, sad as that thought is.

Recommendation:
Some Girls Are talks about some pretty heavy things, not the stuff for overly sensitive readers, but is a must-read for those who can stomach human nature.

Thoughts on the cover:
Nice shot of Regina in front of her locker. They even got her wearing a sweater like in the beginning. Not sure if that's wear and tear on the locker or the painted over graffiti, but the details area nice touch.
Posted by Andrea at 10:41 AM