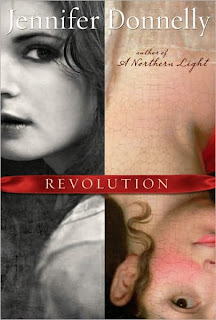 Summary:
From the inside cover:
BROOKLYN: Andi Alpers is on the edge. She’s angry at her father for leaving, angry at her mother for not being able to cope, and heartbroken by the loss of her younger brother, Truman. Rage and grief are destroying her. And she’s about to be expelled from Brooklyn Heights’ most prestigious private school when her father intervenes. Now Andi must accompany him to Paris for winter break.

PARIS: Alexandrine Paradis lived over two centuries ago. She dreamed of making her mark on the Paris stage, but a fateful encounter with a doomed prince of France cast her in a tragic role she didn’t want—and couldn’t escape.

Two girls, two centuries apart. One never knowing the other. But when Andi finds Alexandrine’s diary, she recognizes something in her words and is moved to the point of obsession. There’s comfort and distraction for Andi in the journal’s antique pages—until, on a midnight journey through the catacombs of Paris, Alexandrine’s words transcend paper and time, and the past becomes suddenly, terrifyingly present.

Review:
This book is sheer brilliance. Reading it was an experience to say the least, I'm still affected by it after finishing it last night. I'll try to explain why I think this book is as powerful as it is, but I don't think I can really do it justice.

Revolution is the story of Andi and Alex. Andi is seventeen, lives in modern day Brooklyn and is slowly fading from life. Her little brother Truman was killed two years ago, her father essentially abandoned the family by throwing himself into his work as a geneticist, and her mother can't cope and spends her days painting portraits of her dead son. As Andi succumbs to anger and grief, she neglects everything except her music. When the school informs her father that Andi's on the verge of failing, he returns. He admits Andi's mother to a psychiatric hospital and takes Andi with him on a business trip to France so she can work on her senior thesis on the French musician Amade Malheurbeau. Andi's father has been asked to come to France to test the DNA of a small human heart that is believed to be that of Louis-Charles, the 10 year-old son of King Louis and Marie-Antoinette that was imprisoned and left to die in 1795 in the midst of the French Revolution. While staying with friends of the family just outside of Paris, Andi discovers a diary inside an old guitar case. The diary is that of Alexandrine Paradis, a street actor during the French Revolution. She chronicles her involvement with the royal family beginning in 1789, and her efforts to try to save Louis-Charles from his imprisonment. Andi immediately takes to the story: Alex is passionate about her craft and musically inclined like Andi, and she was trying to save a boy the same age as Andi's brother Truman. With the identity of the small heart not yet confirmed, Andi begins to hope that Alex did indeed prevent the cruel death of Louis-Charles, so much that she relies on the story to rebuild the hope she's lost since her brother's death. But what happens when she begins to doubt that Alex succeeded? How does a person regain their faith in a world filled with atrocities?

This book was amazing on so many levels. On a very superficial level, I had a soft spot for Andi because I share her nickname (Andi's real name is Diandra). I've never come across a book where the main character had the same name as me (or nickname in this case), so it was pleasing in a narcissistic way. The book was wonderfully well written, Andi's voice comes across well in the first-person narration as does Alex's in her diary entries. I loved Andi's voice, she's sad and overcome with guilt and grief but her feisty personality still shines through her music. The history is incredibly well researched, as evidenced by the four pages of sources at the back of the book. The history is interesting too. I studied the French Revolution in school, but we never really learned about the fate of Louis and Marie-Antoinette's children, and the issue of Louis-Charles really affected me. All the things in the book are like a puzzle, and it takes a while to see how everything fits together, but they all do, and to the point where it's very natural and doesn't feel cliched or overly convenient: Andi's music, her dad's DNA testing, the Revolution, Malheurbeau, everything. I even like the way the author included a love interest, Virgil. There was just enough romance, but not enough to overpower the other elements in the book. Plus, I love how Virgil and Andi would sing each other lullabies over the phone to help each other sleep, can we say "awww"?

There's a lot of allegory and metaphor in Revolution. Alex's full name is an anagram of Andi's, Louis-Charles looks a lot like Truman, the title itself, the circumstances behind Truman's death, Truman's key that Andi wears around her neck, the parallels between the girls' lives, and even the references to Dante's Divine Comedy that appear at each division of the book all carry a lot of meaning. This book is a gold mine for a teacher like me, since I think in themes and metaphors all the time.

Some people didn't enjoy this novel due to Andi and her issues, calling her too emo. To me, Andi was presented as a girl who was realistically suffering in her grief (usually people experiencing the breakdown of a whole family have a reason to be depressed), so she didn't come across as emo at all, you could call her a well-rounded griever. I guess that's a credit to the author that nothing in the book was really off-putting, even the "twist" at the end of the book (it doesn't take a rocket scientist to figure out what it is), which would normally be cliche, comes in at just the right time and lasts just long enough to be appropriate and doesn't overtake the tone of the story. I think the only thing about Revolution that was remotely negative was that it took a little bit to get into in the very beginning, mostly because of Andi's classmates. I wanted to smack half those kids for being spoiled brats, but I'm pretty sure that was intended as an allegory as well.

All in all, Revolution was beautiful. It talks about things in our world that turn out to be quite ugly, but the message of transcending the ugly in this world with virtues that are timeless makes it beautiful. This book is an experience to read, and if you're as affected by it as I was, it will truly rock your world.

Recommendation:
A powerful novel in all aspects that includes a little bit of everything (history, romance, adventure, etc.). This book defies description and you just have to trust me that it's awesome and you must read it. It's truly one of the best YA books I've read, so read this!

Thoughts on the cover:
I really like this cover, it doesn't immediately scream "YA cover" when you look at it. I like how you get portrait shots of Andi and Alex on the cover, and how they're arranged is quite nice. I also like how Truman's key is shown on the spine, and the ribbon from it extends to the front and back covers and that's where the title is placed.
Posted by Andrea at 1:16 PM