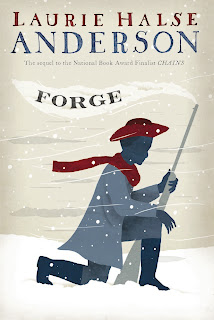 Summary:
From Amazon.ca:
In this compelling sequel to Chains, a National Book Award Finalist and winner of the Scott O’Dell Award for Historical Fiction, acclaimed author Laurie Halse Anderson shifts perspective from Isabel to Curzon and brings to the page the tale of what it takes for runaway slaves to forge their own paths in a world of obstacles—and in the midst of the American Revolution.

The Patriot Army was shaped and strengthened by the desperate circumstances of the Valley Forge winter. This is where Curzon the boy becomes Curzon the young man. In addition to the hardships of soldiering, he lives with the fear of discovery, for he is an escaped slave passing for free. And then there is Isabel, who is also at Valley Forge—against her will. She and Curzon have to sort out the tangled threads of their friendship while figuring out what stands between the two of them and true freedom.

Review:
After reading Chains last year, I knew this was a series I was going to be following. The author is one of my favourites, and anything she writes is golden. Forge is another one of her historical fiction titles, following Chains in a series about the American fight for independence and the impact on slavery at the same time. In Chains we looked at Isabel, sold to a Tory family in New York with her sister Ruth, and her struggle with loyalty over who will award her freedom. When she realizes neither side will honour promises made to slaves, Isabel runs away with a fellow slave named Curzon in the hopes of eventually reuniting with her sister, who was sold and sent to the South.

In Forge, the focus shifts from Isabel's narration to Curzon's, so we get more of a look into another aspect of the revolutionary war: the winter of 1778 at Valley Forge and the conditions soldiers had to endure. Curzon and Isabel separate when she insists on going south to find Ruth, while he falls into a stint as a soldier in the Patriot army that is eventually stationed at Valley Forge. Curzon chronicles his life as a soldier, through the hard labour of building cabins in the winter, the food shortages (I learned what Firecake is and how much I never want to eat it), as well as the lack of clothing supplied to soldiers even in the midst of winter. I liked how we had Isabel's perspective as a house slave in the first book, and now Curzon shows us how free black men and slaves both served in the revolutionary army. Of course the author is trying to illustrate the hypocrisy of people fighting for freedom when white people felt only they were deserving of it and denied it to their slaves. Whereas Chains pretty much focused on Isabel and her environment as a slave struggling with her loyalty, Forge shows that as well as the conditions that soldiers endured at Valley Forge regardless of race, so you see a few different issues in Forge, which was nice.

The writing is wonderful, handled with a surprising amount of humour (the potty talk between Curzon and his fellow soldiers is hilarious), and the issues presented are important yet not often examined in traditional children's historical fiction (slavery in the Revolutionary War as opposed to the Civil War). I have to give this author credit for making this kind of historical information really accessible through her novels, she has a great way of packing a lot of learning into her narratives without the reader even realizing it. The series continues in Ashes (out hopefully later this year), so I'll definitely be picking that up when it's out.

Recommendation:
One of the better children's book series I've read, and it's historical fiction to boot (getting kids to read historical fiction and like it is like pulling teeth, so this makes it easier!). You do need to read Chains before starting Forge to get the full effect of the series, so read both of these!

Thoughts on the cover:
I like the continuation from the cover of Chains to Forge's. The same type of block colour illustration shows Curzon outfitted as a soldier, though with much more clothing than he normally has throughout the novel. I like how you can see the title in the smoke from his rifle, similar to how the title in Chains was designed to appear like cuffs on Isabel's wrists.
Posted by Andrea at 7:07 PM