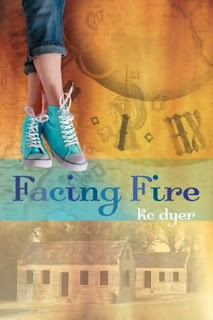 Summary:
From the back of the book:
Darby seems like an average 13-year-old girl-doing homework, perfecting her skateboarding moves, and avoiding her younger sister. But not everything is as it seems. For one thing, Darby and her friend Sarah share a terrible secret about what caused the fire at their junior high school. For another, the weird, dream-like adventures of the previous summer have returned: once again, Darby is transported back in time to worlds more terrifying and vivid than she could have ever imagined from history books. Over the course of a life-changing week, she discovers that the key to understanding the present might lie in unlocking the past.

Review:
Facing Fire is the sequel to the author's early 2009 children's novel, A Walk Through A Window, which I read right when it came out. In order to understand Facing Fire, you'll need some background info on A Walk Through A Window. In the first novel, Darby is 13 and is sent to her grandparents' home in Prince Edward Island for the summer while her parents are renovating their Toronto home. Her grandfather is suffering from Alzheimer's, which Darby slowly discovers, and her parents are renovating their house because they are expecting another baby, which they also neglect to tell her. While there, Darby meets Gabriel, who acts as her guide when she accidently falls through a window in Gabe's house into a timeslip into the past. Darby acts as an observer to aboriginal peoples passing the Bering Strait and Irish and Scottish immigrants arriving in Canada in the 1800s. Since she's a typical cynical teenager, these experiences all seek to show Darby the importance of her heritage and the efforts people made to come to Canada for a better life. And that was the first novel.

Facing Fire continues some months after the events in A Walk Through A Window: Darby is 14 and in high school (not sure why the info on the back-of-the-book summary is wrong), and her baby sister Grace is now around 6 months old. While hanging around her school after hours with her friend Sarah, they see an anti-gang poster that depicts a person of colour holding a gun. Sarah, who is bi-racial, takes offense at the poster and decides to burn it in protest. Darby tries to persuade her not to, but Sarah does anyway. After the girls leave, the poster ends up causing a small fire, which leads to their school closing a week early for March Break (spring break) in order to facilitate repairs. Needing care plans for their daughter, Darby's parents send her to Kingston for the week to help out a family friend, Fiona. While in Kingston, Darby falls through another window in an old house and witnesses acts of prejudice and injustice throughout Canadian history. This is prefaced by Darby naively arguing with Sarah that Canada isn't racist and doesn't engage in acts of racial profiling. Darby witnesses Acadians fleeing from the British at Fort Frontenac in 1758, Tecumseh's nephew on a prisoner ship during the War of 1812, and also the plight of an escaped slave on her way to Canada. Amidst her visions through the window, Darby meets Zander, who travels with her during some of the timeslips. Zander is Mohawk, so he and Darby get into discussions about what it means to be Canadian, both of them arguing that they have just as much claim to being Canadian as the other. Fiona is also investigating boil water advisories in Canada, which almost always occur on First Nations lands, sometimes lasting for years. So the subplots in the novel, as well as the historical visions, all deal with prejudice and injustices in Canada relating to race.

I loved A Walk Through A Window. The premise was executed well, and even though Darby just watches the historical events unfold rather than interact with them, the author made it work in the context of the story. Facing Fire follows the same mold, just with a different theme going through the novel, but it just didn't impress me as much as the first novel did. Perhaps it's because Gabe doesn't make a repeat appearance in this installment; he gave the first novel a bit of a mystic feel to Darby's adventures, that she was experiencing them for a special reason. I kept getting the feeling throughout Facing Fire that the adventures were an excuse for a thinly veiled after-school special type of message, rather than something with a higher purpose that just happened to teach Darby a message. I love these books because of the Canadian history perspective, and especially Facing Fire because the theme of it is so important and one that really applies to kids today, but in terms of a whole pleasing package, Facing Fire falls a little short compared to A Walk Through A Window.

Recommendation:
Wonderful premise with an important theme and message. Not as well executed as the first novel, A Walk Through A Window, but a definite must-read for kids due to the themes addressed.

Thoughts on the cover:
A different setup than the cover of A Walk Through A Window, this one has the clock image taking up less space, with the picture of the slave cabins on the bottom and Darby's legs in the upper left corner. I don't get the legs, I really don't. Are they supposed to be tip-toeing or something? I do like the turquoise and golden-yellow colour scheme.
Posted by Andrea at 12:45 PM