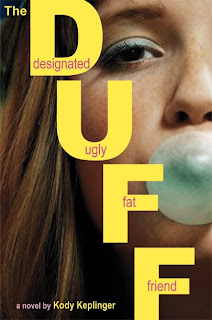 Summary:
From the inside cover:
Seventeen-year-old Bianca Piper is cynical and loyal, and she doesn't think she's the prettiest of her friends by a long shot. She's also way too smart to fall for the charms of man-slut and slimy school hottie Wesley Rush. In fact, Bianca hates him. And when he nicknames her "Duffy," she throws her Coke in his face.

But things aren't so great at home right now. Desperate for a distraction, Bianca ends up kissing Wesley. And likes it. Eager for escape, she throws herself into a closeted enemies-with-benefits relationship with Wesley.

Until it all goes horribly awry. It turns out that Wesley isn't such a bad listener, and his life is pretty screwed up, too. Suddenly Bianca realizes with absolute horror that she's falling for the guy she thought she hated more than anyone.

Review:
You really have a realistic, relatable character in Bianca. She's seventeen, sarcastic, her parents are getting a divorce, her dad's a recovering alcoholic that's threatening to relapse, and she doesn't believe in all that mushy love crap. So when things get too much for her to handle at home, she escapes by getting into a purely sexual relationship with the school's man-whore, Wesley Rush.

This novel is actually a really sweet (albeit very sexed up) story about facing your problems head-on rather than taking up with things (or people) to distract you from them. The characters are very believable teenagers and are realistic in what they say and do. Bianca, Jessica, and Casey are refreshingly good friends that aren't out to screw each other, and other than Bianca's exploits, they've all got good heads on their shoulders. Even Wesley the playboy is a well developed and layered character.

The only qualm I had with the book was the amount of sex. Not that I'm naive enough to believe that teenagers don't have sex, I teach them every day, I know they do, but I just don't think they have quite that much of it. So that part of it was a little taxing on my suspension of disbelief. However, I do love the way sex was handled in the book. Everyone takes the proper protective precaution, and there's even a pregnancy scare that leads to a wonderful "holy crap, I could've ruined my life, I'm going to do things differently from now on" moment. So even though there is a lot of teenage sex in this novel, I couldn't ask for a better portrayal of it.

Recommendation:
A really nice story about facing up to your problems: well-written, and very relatable characters. While there is quite a bit of sex in the novel, it's responsibly portrayed, so I can honestly say I wouldn't have any issues giving it to a high school aged kid to read. All in all, a really fun, enjoyable read.

Thoughts on the cover:
I like it. Yellow is an under-represented colour in covers these days, and it fits into this so well. I also like how Bianca's eyeshadow and her gum are in matching colours, very cute.
Posted by Andrea at 1:23 PM