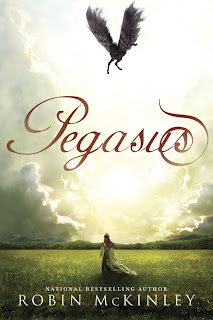 Summary:
From the author's website:
Because of a thousand-year-old alliance between humans and pegasi, Princess Sylviianel is ceremonially bound to Ebon, her own pegasus, on her twelfth birthday. The two species coexist peacefully, despite the language barriers separating them. Humans and pegasi both rely on specially-trained Speaker magicians as the only means of real communication.
But it’s different for Sylvi and Ebon. They can understand each other. They quickly grow close—so close that their bond becomes a threat to the status quo—and possibly to the future safety of their two nations.

Review:
Ah, Robin McKinley, I love her books in terms of subject matter and she has a beautiful writing style, but there's something about it I just can't stand.

Robin McKinley writes beautifully, she also tends to write in a very non-linear format, which some people like. Other authors write in a non-linear format and I like it, but for some reason when McKinley does it it just confuses me. One minute Sylvi and Ebon are talking in the present and a second later they're remembering long segments of something that happened years ago without a lot of lead up to the change, it made for a lot of flipping back pages to make sure what time period I was reading about. Combined with the fact that close to the first 200 hundred pages of the novel are just world building and exposition (background information) with no real plot to it, it took me a while to get into Pegasus. But once you get past the world building and become a little used to the non-linear segments, Pegasus is just beautiful. I can't think of any book I've ever read that deals with this area of fantasy (pegasi/flying horses in general), and the author does it justice.

Sylviianel (Sylvi, or Syl) is the 12-year-old princess of a kingdom that made an Alliance with the Pegasi hundreds of years ago, and one of the visible aspects of the Alliance is the bonding between all the high-born human children and the children of the Pegasi king. As the lowly 4th child after three brothers, she's lucky to be bonded to Ebon, 4th child to the Pegasi king, Lrrianay. But Sylvi and Ebon are different from the moment they meet, they can speak to each other telepathically without the use of a Speaker (a magician that acts as interpreter) that every other bonded pair requires in order to speak without the use of awkward sign language. As Sylvi and Ebon grow older (next time you see Sylvi she's 16), certain figures of the court resent the fact that they can speak so easily because it jeopardizes the power that the Speakers have come to possess, especially after Sylvi becomes almost an ambassador of sorts to the Pegasi kingdom.

The one thing that's extremely well-done here is the world building (despite the sometimes annoying amount of it), which is good since this is a high fantasy. You really get a sense of the Pegasi as a people and ideas about their culture and spirituality. I love how the Pegasi dream of having hands like the humans dream of having wings, and that Ebon wants to be a sculptor. You almost forget that the Pegasi aren't actually real because they're described in such in-depth way. The whole history of the Alliance was very well explored, as was the circumstances of being a bonded pair to a Pegasus and what the experience is like. The characters are well-developed (though it took a while for Sylvi to grow on me, she was kind of bland at first), and the characterization of the Pegasi are particularly well done. My favourite part was when Sylvi encountered a little baby Pegasi, it was probably the cutest "awww-inducing" scene I've ever read in anything.

One thing you'll want to keep in mind. The ending will infuriate you, mostly because there is a sequel coming, but the cliffhanger ending is horrible, no ends tied up whatsoever, I can guarantee you will hate it. Again, there's a sequel coming (probably next year), but I figured I'd give you fair warning.

Recommendation:
Stunning and beautiful once you get past the world-building and really into the heart of the book. The non-linear style might be a turn-off for some people, but for those of you who can stick it out, you're in for something that feels so classic it's a wonder it hasn't existed in the fantasy cannon for the past 50 years.

Thoughts on the cover:
Gorgeous. I love the juxtaposition between small Sylvi (it only heightens how short she is normally) and Ebon flying above her. The burgundy cursive font is pretty, and I like how it fades out t the edges the further away from Ebon it is.
Posted by Andrea at 5:53 PM