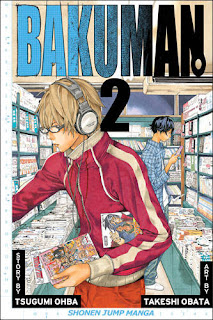 Summary:
From the back of the book:
Is becoming a successful manga artist an achievable dream or just one big gamble?

Average student Moritaka Mashiro enjoys drawing for fun. When his classmate and aspiring writer Akito Takagi discoers his talent, he begs Moritaka to team up with him as a manga-creating duo. But what exactly does it take to make it in the manga-publishing world?

After Moritaka and Akito collaborate on a manga together, they venture to publishing house Shueisha in hopes of capturing an editor's interest. As much potential as these two rookies have, will their story impress the pros and actually get printed?

Review:
After reviewing Volume 1 of this series back in September, I knew I liked it, despite the cultural idiosyncrasies apparent here (read: blatant sexist remarks) that some readers (and reviewers) did not understand. The same is true of volume 2: the story is unique among manga and because of that, there's going to be some things that the average reader won't get.

A lot of shonen manga are fantasy stories that take place in alternate universes that barely resemble the country they were created in, so stuff that goes on in the story is believable automatically because it's a fantasy universe. Because Bakuman is based in modern day Japan and is about two boys that go to school and want to be manga creators, some of the stuff in the series is unique to the modern day experiences of Japanese teenage boys. One part for example had Moritaka sitting beside Miho (their seats in the classroom were moved), and he was literally spazzing internally over sitting next to this girl he's crushing on even though both of them have essentially agreed to marry the other. This kind of reaction isn't that out of line with how a real Japanese kid might react in the same situation. Relations between the sexes, even when they're kids at school, is very different from our experiences as Westerners, so it's not completely out of line that a well-raised middle class boy like Moritaka would be completely clueless about girls and freaking out over simply sitting beside the girl he likes, especially since Japanese kids (on average) don't have much of a life beyond school, they may not actually date much, some schools even have rules about their students dating or holding down part-time jobs. So readers can trust me when I tell them that a lot of the content in these books is quite realistic considering they were intended for Japanese audiences, not Western ones.

The story itself continues to impress me plot-wise. It's very slice-of-life with no real conflict thus far, it's purely about two boys that want to be manga creators and their experiences with it. It's actually kind of refreshing, even their "rival" character that was introduced in this volume didn't even fill a typical rival role, he's more of a wunderkind that's so absorbed in his own work he literally breathes his creations, I don't think he would notice competitors if they tapped him on the shoulder. I'm interested to see where this series will go, there's 10 volumes out now in the original Japanese, of which 2 have been translated, with the rest coming out at a rate of 1 every 2 months. I like the story, but I'm not sure if I could take the same thing for 10 volumes and not get sick of it, unless the plot changes beyond what we've seen so far, which I'm sure it will, just not sure of the degree at which it will change.

Recommendation:
Again, I like that it's different from the typical shonen fare, but there is a lot of cultural content (including gender roles) that might confuse Western readers and turn them off the series.

Thoughts on the cover:
I like the use of the original Japanese covers, aside from the bordering and some colouring differences in the title font they're almost identical.
Posted by Andrea at 7:40 PM