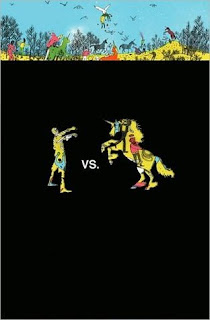 Summary:
From Amazon.ca:
It's a question as old as time itself: which is better, the zombie or the unicorn? In this anthology, edited by Holly Black and Justine Larbalestier (unicorn and zombie, respectively), strong arguments are made for both sides in the form of short stories. Half of the stories portray the strengths--for good and evil--of unicorns and half show the good (and really, really bad-ass) side of zombies. Contributors include many bestselling teen authors, including Cassandra Clare, Libba Bray, Maureen Johnson, Meg Cabot, Scott Westerfeld, and Margo Lanagan. This anthology will have everyone asking: Team Zombie or Team Unicorn?

Review:
This is the kind of book a geek carries around for the sole purpose of acting as a conversation starter or attracting the attention of the opposite sex (or the same sex if that's what floats your boat). Not only is it wonderfully entertaining, it's one of those incredibly geeky things that will be the stuff of inside jokes for eons.

Zombies vs. Unicorns is edited by Holly Black (Team Unicorn) and Justine Larbalestier (Team Zombie), and includes short stories from various young adult authors (all big names too) that seek to answer the question of what is better: zombies or unicorns? Reading the book didn't really sway my opinion, I still think unicorns can kick zombie butt any day: huge, massive, horse-like creatures with a weapon fused to the middle of their heads? No contest.

The selection of authors gives every YA reader something they like, they even had a story by Garth Nix (my fave YA author from when I was actually in the target demographic of YA). Like all short story anthologies, some stories you're going to like better than others, which the same is true here, some are stellar and some aren't so hot. The stories range from humorous to serious across different subject matter (but always including either zombies or unicorns or both). Some of my favourites were "Purity Test" by Naomi Novick and Carrie Ryan's "Bougainvillea". Better even than the stories is the commentary by Black and Larbalestier before each story where they square off to defend their respective teams, it's hilarious to say the least.

Recommendation:
This is a must read for geeky readers who after hearing the title respond with "that is awesome!", or for readers that just have a really unique sense of humour.

Thoughts on the cover:
This is one of the more unique covers I've seen. The black dust jacket actually doesn't cover the entire cover all the way, so it allows you to see the mass of colour battle scene beneath it. The battle scene itself is amazingly detailed, I really hope the paperback version retains these things.
Posted by Andrea at 4:29 PM