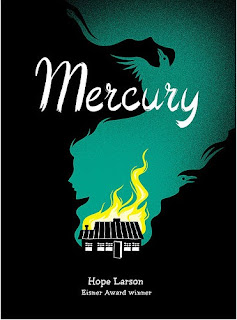 Summary:
From the back of the book:
In 1859 French Hill, Nova Scotia, Josey Fraser has just met handsome Asa Curry-a man with a mysterious and traveled past. While quickly winning young Josey's heart, Asa reveals a secret ability to locate gold on the Fraser's farm. But there is a darkness in the woods...an in Asa.

In the same town one hundred and fifty years later, Tara Fraser is dealing with the aftermath of her house burning down; a house that has been in her family-and Josey's-for generations, when Tara discovers a pendant that turns out to be much more than a simple heirloom. As Josey's story plunges into tragedy, Tara's emerges with the promise of gold.

A compelling combination of history and romance, marked with Larson's signature touch of magical realism, Mercury is a remarkable depiction of two girls tied by blood and separated by time.

Review:
Mercury operates in two timeframes that occupy the same setting: the fictional French Hill in Nova Scotia. Josey Fraser lives in 1859 before Confederation, and Tara Fraser lives in modern day 2009. Both girls are living typical teenage problems: Josey is trying to be true to her heart that loves Asa Curry while dealing with her family that doesn't approve of him, and Tara is dealing with a mother working in another province that wants her to move away from the place where their family is from. The mercury in the title refers to a necklace with a drop of mercury in it originally owned by Asa that gets passed down to Tara that has the ability to detect gold, almost like a divining rod for finding water. The necklace is a catalyst for change in both the girls' lives, both positive and negative.

What amazed me was that the author/illustrator isn't Canadian, but she told the story with such attention to detail that I assumed that she was Canadian, she even incorporated local myth and legend from the area. I love her little footnotes explaining what a "loonie" and a "double double" are for the non-Canadian readers.

The switch between the time periods was very frequent, but signified by a darkened black border (1859) or blank white border (modern day), so it wasn't confusing at all. The author made the switch at the right times, just when each girl's story began to see similarities to the other's.

All in all, a really engaging historical fiction aligned with realistic fiction, with a touch of magic.

Recommendation:
One of the better graphic novels I've read this year, a good choice for kids that like historical fiction or that just like unique concepts in general.

Thoughts on the cover:
Very cool. The way the silhouette of Josey/Tara turns into the shadow of the crow that all originates from the smoke of the burning house is very well done.
Posted by Andrea at 7:05 PM