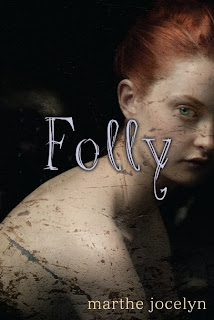 Summary:
From the inside cover:
It is the late 1800s, and a few moments of folly lock together the destinies of four people.

Mary, who begins "exceedingly ingnorant" (apart from what a girl can learn from family mayhem, a dead mother, and a grim stepmother), but who learns more than she'd like to about lust and betrayal in the fine London house where she works as a servant.

Eliza, another maid, is Mary's nemesis-but who is the betrayer and who betrayed?

A teacher named Oliver avoids feeling anything, while knowing too well what matters.

And then there's the fostered boy, James, torn away from the only family who cares for him to grow up in the stern confines of a foundling home. What chance does he have without knowing his roots?

In the chaotic way of true history, where the past, present, and future collide, Marthe Jocelyn uses four voices to tell a spellbinding story that brings Victorian London to life and explores emotions, joy, and sorrows that are as current as today's news.

Review:
Folly is a short read, but a good one. Four voices from the 1870s and 1880s merge together to show how one simple act can affect the lives of numerous people, although all four characters are seemingly strangers until readers piece together how they're connected. The story is mainly Mary and James', but Oliver and Eliza were good additions to round things out: Mary is sympathetic but naive, Eliza is blinded by jealousy, Oliver is a kind and enigmatic, and James is a spunky little guy (I had a soft spot for James). The alternating points of view aren't confusing since all four characters have such distinct voices (right down to the slang they do or don't use), but readers need to pay attention to the dates that accompany the character's name at the beginning of the chapters to really make sense of everything.

I loved the history of this novel. Victorian era England is always interesting in my opinion, especially the social history of the lower classes. In this story in particular, you get to see how things were for the general public before social welfare programs were instituted and just how bad things could get for people. Through James we see the Foundling Hospital (based on the real-life Coram Foundling Hospital in London) and exactly what became of children who were lucky enough to find themselves there. The children were told that they were the "progeny of sin" and thus had to devote their adult lives to useful pursuits to repay the kindness of others towards their unfortunate situation. Through Mary we see what it was like to be sent off to work outside of the home if your family was poor enough to need your income, or just wanted to be rid of you. You also see just how few options someone had if things went completely downhill, most choices narrowed down to the workhouses, which weren't an attractive option by any means.

I can't say much more because I'll give away how everything's connected (though it doesn't take much to figure it out), but the writing is good and engaging, the characters are appealing, and the author really makes this particular style (numerous interconnected voices) work for this novel. Plus, the fact that the author based the whole novel from her family's history is pretty interesting too.

Recommendation:
This book's been getting excellent reviews for a good reason, read this!

Thoughts on the cover:
Beautiful. You can't help staring at this cover, it just sucks you in. I like the detail on Mary's skin that makes it look like she's made out of stone that's been weathered or chipped away.
Posted by Andrea at 1:18 PM