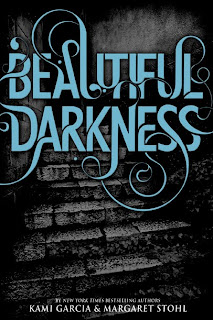 Summary:
From the inside cover:
Ethan Wate used to think of Gatlin, the small Southern town he had always called home, as a place where nothing ever changed. Then he met mysterious newcomer Lena Duchannes, who revealed a secret world that had been hidden in plain sight all along. A Gatlin that harbored ancient secrets beneath its moss-covered oaks and cracked sidewalks. A Gatlin where a curse has marked Lena's family of powerful Supernaturals for generations. A Gatlin where impossible, magical, life-altering events happen.
Sometimes life-ending.
Together they can face anything Gatlin throws at them, but after suffering a tragic loss, Lena starts to pull away, keeping secrets that test their relationship. And now that Ethan's eyes have been opened to the darker side of Gatlin, there's no going back. Haunted by strange visions only he can see, Ethan is pulled deeper into his town's tangled history and finds himself caught up in the dangerous network of underground passageways endlessly crisscrossing the South, where nothing is as it seems.

Review:
I read the first book in this series, Beautiful Creatures , this time last year and loved it, not necessarily for it's plot, but for the atmosphere and the details that went into it. Beautiful Darkness is very similar. This book picks up after the events of the first book, with Lena and Ethan attending Macon's funeral. Lena becomes different afterwards, and starts to distance herself even from Ethan. He decides to find out exactly what's up with Lena and becomes part of the battle over Lena's future as a Light or Dark Caster.

Like the previous book was infused with metaphors from To Kill a Mockingbird (the book Ethan and Lena study in English class), this book is essentially Dr. Jekyl and Mr. Hyde (another highlighted book from Ethan's English class). The whole novel revolves around Lena's choice to go Light or Dark, since the claiming that was supposed to happen at her 16th birthday never occurred. Again, the plot is nothing to write home about, the themes are common enough to most readers, and as soon as you clue in to the whole Jekyl/Hyde thing you know exactly how the novel is going to end. The beauty of this installment, like the previous book, is in the details. The southern setting is unique and refreshing (it's good to have a book that doesn't take place in a big city for a change), and the characters have such well-developed and dynamic personalities. My favourite of course is Amma, she's the Southern, mystic equivalent of the hard-edged grandmother that doesn't take crap from anyone, and she made me laugh my head off so many times I lost count.

Like in the previous book, I love how the whole experience is narrated from Ethan's point of view...a supernatural romance where the girl is the one with the powers and the mortal boy falls in love with her is a nice change of pace from the usual fare from this genre. We do hear more from this book about Ethan's mother and what happened to her; actually, we get a lot of development of the Caster universe period since a lot of the focus is off Ethan and Lena, which was good to see.

Recommendation:
The plot's not stellar, but if you're looking for a supernatural romance with a unique setting, characters, and narration, then read the first book, Beautiful Creatures, and give this a try.

Thoughts on the cover:
So pretty. The theme from the first cover is carried over here, except with blue accents rather than purple. The shade of blue they used here is nice, and the whole cover is shiny and shimmers in the light. The font used for the title is very flow-y, which I like.
Posted by Andrea at 12:29 PM