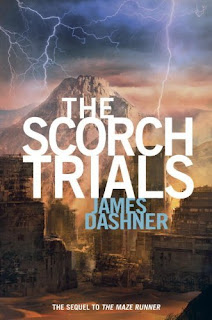 Summary:
From the inside cover:
Solving the Maze was supposed to be the end. No more puzzles. No more variables. And no more running. Thomas was sure that escape meant he and the Gladers would get their lives back. But no one really knew what sort of life they were going back to.

In the Maze, life was easy. They had food, and shelter, and safety . . . until Teresa triggered the end. In the world outside the Maze, however, the end was triggered long ago.

Burned by sun flares and baked by a new, brutal climate, the earth is a wasteland. Government has disintegrated—and with it, order—and now Cranks, people covered in festering wounds and driven to murderous insanity by the infectious disease known as the Flare, roam the crumbling cities hunting for their next victim . . . and meal.

The Gladers are far from finished with running. Instead of freedom, they find themselves faced with another trial. They must cross the Scorch, the most burned-out section of the world, and arrive at a safe haven in two weeks. And WICKED has made sure to adjust the variables and stack the odds against them.

Thomas can only wonder—does he hold the secret of freedom somewhere in his mind? Or will he forever be at the mercy of WICKED?

The Scorch Trials (I just love that title) opens after the events at the end of The Maze Runner with Thomas and the rest of the boys out of the maze and in the care of their rescuers. WICKED rears their ugly head again by throwing the boys into yet another controlled experiment, this time making them pass through the now decimated desert that is North America, to a safe haven in just two weeks. As a little incentive, WICKED infects the boys with The Flare, a disease that's a combination of Alzheimer's and plain psychosis (it eats at your brain and makes you progressively crazy till you die), and tells them that the results of the experiment WICKED is conducting on them will lead to a cure...but only if the reach their target in two weeks, if they don't they'll surely die. Nothing like a little pressure, right? Oh, and the boys aren't the only ones with the disease. Roaming all over the Scorch are Cranks, people that are so infected with The Flare that they hunt other humans for food, so they have to deal with that as well as insanely hot temperatures. So off the boys go, combatting all manner of things that just want them dead (and kill them in the strangest yet gruesome ways). Thomas starts to remember more things from his time in WICKED, which are illuminating as well as conflicting, since he's not sure how much he should reveal to the others or not, or even if his memories are even real or something WICKED implanted just to mess with his head. Plus that whole plot thread with Teresa is just wonderfully done, you're not actually sure if she's bluffing or if she's serious.

The plot moves along amazingly quickly, and the focus quickly shifts from the group of boys from The Maze Runner to more of just Thomas in this installment. Plus, poor Thomas, he's like the embodiment of Murphy's Law if it were a teenage boy, kid just can't catch a break. The focus here again, like in The Maze Runner, is on the plot, so the character development is a little lacking for those people that like their novels equal parts character and plot-driven, but this very thing alone makes it great for our boy readers (hence why I recommend this along with The Hunger Games for practically any boy who hasn't read them).

Recommendation:
Just read these, I promise you'll like them (especially if you're a teenage boy). This series isn't The Hunger Games or Chaos Walking, but it's a great little action-packed series that's a very good addition to the dystopian area of YA fiction.

Thoughts on the cover:
I love these covers because they focus on the landscape of the books rather than the characters; the cover artist is amazing!
Posted by Andrea at 9:37 PM