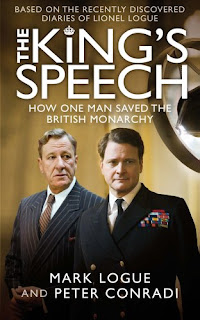 Summary:
From the back of the book:
One man saved the British Royal Family in the first decades of the 20th century-and he wasn't a prime minister or an archbishop. He was an almost unknown, and self-taught, speech therapist called Lionel Logue, whom one newspaper in the 1930s famously dubbed "The Quack who saved a King".

Logue wasn't a British aristocrat or even an Englishman-he was a commoner and an Australian to boot. Nevertheless, it was the outgoing, amiable Logue who single-handedly turned the nervous, tongue-tied Duke of York into one of Britain's greatest kings after his brother, Edward VIII, abdicated in 1936 over his love of Wallis Simpson.

This is the hitherto untold story of the remarkable relationship between Logue and the haunted future King George VI. Written with Logue's grandson and drawing exclusively from his grandfather Lionel's diaries and archive, it throws an extraordinary light on the intimacy between the two men-and the vital role the King's wife, Elizabeth, known to a later generation as the Queen Mother, played in bringing them together to save her husband's reputation and reign.

The King's Speech: How One Man Saved the British Monarchy offers astonishing insight into a private world. Logue's diaries also reveal, for the first time, the torment the future King suffered at the hands of his father, George V, because of his stammer. Never before has there been such an intimate portrait of the British monarchy-at the time of its greatest crisis-seen through the eyes of an Australian commoner who was proud to serve, and save, his King.

Review:
I had the opportunity to see an advance screening of The King's Speech film a few days ago (it doesn't open in wide release until Dec. 22), and loved it to bits. The history behind the film is something that peaked my interest, and after I didn't win a raffle copy of the book they were giving away at the screening, I went out and bought my own.

I was surprised to find that the movie actually preceded the book, that Logue's grandson was inspired to write the book after being invited to the movie set. Apparently the scene in the film where Logue recites Shakespeare with his boys is true, since the grandson remembers his father (Logue's son) doing the same with him.

The book is nicely laid out and devotes a few chapters each to the early lives of Logue and the Duke of York before their meeting in the late 1926. The section on the Duke of York's early life was the most interesting to me, since the film touched on a few details from that period that I wanted to see if they were true or not (they were). The book also goes beyond where the movie ends in 1939, to the deaths of the King and Logue in the 1950s. There were a few key differences between the film and the book that made me glad I'd read the book. The film makes it out like the Duke's stutter is mainly a mental thing, whereas the book says the opposite, that it was purely a physical thing that could be corrected through the use of special techniques. The passage of time is also hard to tell in the film, it's made out as if the Duke and Logue saw each other constantly from 1926 until the big war speech in 1939, but in reality they saw each other frequently until around 1928 and then met very infrequently from then on since the Duke had a handle over his speech issues (though Logue was with him for every speech he had to give).

Recommendation:
Well worth reading if the subject matter interests you, but don't expect a novelization of the movie, this is much more factual than the film.

Thoughts on the cover:
Not sure how I feel about having Colin Firth and Geoffrey Rush on the cover, I'd kinda prefer photos of the actual King and Logue, but I'm pretty sure Firth and Rush are nicer to look at either way ^^;
Posted by Andrea at 2:22 PM