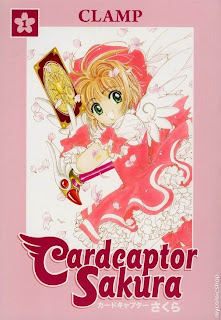 Summary:
From Amazon.ca:
Fourth-grader Sakura Kinomoto found a strange book in her father's library - a book made by the wizard Clow to store dangerous spirits sealed within a set of magical cards. But when Sakura opened it up, there was nothing left inside but Kero-chan, the book's cute little guardian beast, who informs Sakura that since the Clow cards seem to have escaped while he was asleep, it's now her job to capture them!

Review:
Ah, Cardcaptor Sakura, one of my favourite manga, it was actually the first manga I owned in the original Japanese language (and added many more after that). CCS is one of my favourites from creators Clamp as well, it's such a sweet story and the artwork is adorable too. I've always thought it's a perfect way to introduce young girls to manga because the story is so appropriate for a younger age group, which not a lot of manga is.

The first English translation of the original 12 volumes (around 200 pages each) in the series was done by Tokyopop in the early 2000s (I still have them in a box somewhere), and the original translation left a lot to be desired. The translation was peppered with "Americanisms" since publishers were afraid that kids wouldn't read comics with intact foreign elements in them, which nowadays the opposite is true: the very ethnic origin of these comics is sometimes the only reason kids are interested in them. Thankfully the translation has improved in this release, it's a lot more faithful to the original Japanese, they even left the honourifics and certain vocabulary intact (for which there is no direct translation). Leaving some of the Japanese aspects intact is fine for someone like me who speaks Japanese and understands a lot of the peculiarities of the language, but for I would have liked to see a glossary included for younger readers that have no clue what "Onii-chan" means. But for seasoned manga readers they'll have no problem reading this.

I have several editions of this series: the original Japanese, the first English release, the revised English release, plus the special edition Japanese release. These Omnibus volumes from Dark Horse are very similar to the special edition Japanese releases that came out a few years ago, except that these English volumes will contain three original volumes bound in one omnibus release (making for 4 omnibus releases total) whereas the Japanese ones came out in 12 volumes. The covers of the English omnibus releases use the same covers as the original volumes, framed by a soft pink boarder with the title logo at the bottom. I was happy to see that the omnibus releases apparently retain the original Japanese katakana title as well (my copy of volume 1 does, so I'm assuming the future releases will as well). The Japanese special editions were in hardcover, and the omnibus editions are in paperback, but since they're putting three volumes into one big one, I'll forgive them that. The omnibus has decent binding too, but I have my doubts as to if it'll hold up to a reader that severely bends the spines on their books.

The thing I liked about the special edition Japanese release was that it included colour pages of all the artwork used as title pages almost to show the divide between chapters, including the images of the bookmarks that were included in the Japanese releases. The omnibus release has that as well, so it's almost as if you have part manga and part mini-artbook, which is great for fans of the gorgeous Clamp artwork. Because the omnibus release here encompasses three original volumes (of which only one cover image is used on the actual cover), the colour pages include the remaining cover art from the other two volumes as well as the other colour art.

And now on to something about the actual story (all I've done is talk about how pretty the physical book is ^^; ). Cardcaptor Sakura is one of my favourite stories: manga, anime, you name it. It's so unbelievably cute, it has a plot that hooks me along and is entertaining even though this is geared towards readers/viewers a heck of a lot younger than me, and you actually care about all the characters involved, not just Sakura. The other thing I've always liked, which might be a huge turn off for other readers, is that Clamp is famous for pushing the boundaries as far as portrayals of relationships in their manga. The fact that Sakura has a huge crush on her older brother's best friend (16 years old to her 10) is the most tame thing you'll see: one of her classmates is engaged to their teacher, Sakura's female best friend is in love with her, and her brother is in love with his male best friend. So we have taboo relationships all over the map. Granted, none of these are ever explicit (not even as much as kissing), and half the references will go over most kids' heads, but the hints are still there, and that might be an issue for some parents that will give this to their daughters thinking it's all flowers and magic wands (which it mainly is). A lot of children's manga from Japan have taboo relationships in them, but it's a cultural thing, they just don't make as big a deal of it as we do. Other that that aspect, the story is very kid-friendly: Sakura's respectful of her dad, tolerates her big brother but isn't an outright brat, is a good student, and even the fighting of the Clow cards doesn't involve a lot of violence (all magical powers and such). Tomoyo makes Sakura different outfits for every card she captures, which of course will appeal to young girls...who doesn't love constant outfit and costume changes?

Recommendation:
The first of four big volumes, the omnibus release is pretty, cleaned up the original translation, and has pages of colour art. It's a manga that is appealing for older and younger readers, but some parents might have issues with some of the relationship portrayals (as tame and innocent as they might be). The second volume (which will complete the first arc of the story line) comes out a few days before Christmas, so I'll definitely be picking all of these up to replace my older English releases.

Thoughts on the cover:
I like how it retains the same type of cover as the Japanese special edition these are (presumably) modeled after. The shade of pink is slightly different and the dust covers on the Japanese ones are slightly sparkly, but all in all, the omnibus cover is what I expected from an English release: nothing super fancy, but not a downgrade from the older covers either.
Posted by Andrea at 4:01 PM