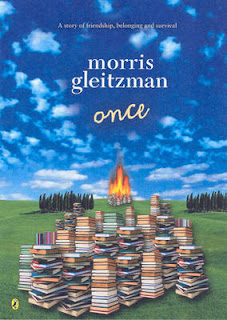 Summary:
From the publisher's website:
For three years and eight months Felix has lived in a convent orphanage high in the mountains in Poland. But Felix is different from the other orphans. He is convinced his parents are still alive and will come back to get him. When a group of Nazi soldiers come and burn the nuns' books, Felix is terrified that his Jewish, bookseller parents will also be in danger. After escaping from the orphanage, Felix embarks on a long and dangerous journey through Nazi occupied Poland, befriending a little orphan girl called Zelda and a kindly dentist, Barney, who hides and cares for Jewish children. But when the Nazis discover them, Barney makes the ultimate sacrifice for the children.

Review:
This book is extremely similar to The Boy in the Striped Pajamas, it was almost eerie. Felix is left at an orphanage in his native Poland for nearly 4 years by his Jewish parents, telling him they will return for him once their bookseller business recovers. The 4 years go by and it is now 1942, and Felix is still convinced that his parents will return for him. After seeing Nazi soldiers burn the books at his Catholic orphanage, he escapes back to the town he used to live in for fear that his parents' store will meet the same fate. Once there he finds other people living in his old house, and rescues a little girl named Zelda after her parents are killed. Felix and Zelda travel to the city, where they are rounded up and placed in the Warsaw ghetto, where they are hidden by Barney, a dentist.

Throughout the whole story, Felix begins to lose his innocence in small increments. He starts off thinking the Nazis are soldiers brought in to reorganize the orphanage's library and they're burning the books because they had too many leftover. Then he realizes the Nazis aren't after the Jews for their books, that they're after the Jews themselves. Felix refuses to believe his parents aren't still alive until Barney tells him about the concentration camps, and that's when Felix loses his love of stories.

The idea of books and stories is a metaphor for Felix's childhood innocence and sense of hope in a desperate situation. As he learns more about the horrors the Nazis are inflicting upon his people, Felix begins to resent stories as he is thrust into reality. Once differs from The Boy in the Striped Pajamas in that Bruno was still very childlike and naive throughout the book, whereas Felix in Once is forced to accept his situation and then he makes a decision on how he's going to react to everything he's heard.

Recommendation:
Because of the themes and they way Felix goes through the story, I think this novel would be better suited to older children (10-12), but it should definitely be read, one of the best children's books I've read this year due to the writing alone.

Thoughts on the cover:
Eh, it's okay, but it looks like everything's just been badly photoshopped into it. The copy I read was the Australian one, so not sure what the domestic release cover looks like.
Posted by Andrea at 1:31 PM