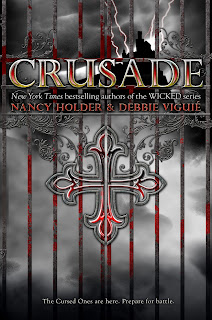 Summary:
From the back and inside covers:
“For thousands of years the Cursed Ones hid in the shadows, fooling mankind into thinking they didn’t exist. Then one day they just…stopped. Skeptics turned into believers one fateful dawn. And no one was ever safe again.”
—From the diary of Jenn Leitner, discovered in the ashes

The Cursed Ones have made their presence known, and the world will never be the same.

For the past two years, Jenn has lived and trained at Spain’s Sacred Heart Academy Against the Cursed Ones. She is among the few who have pledged to defend humanity or die trying. But the vampires are gaining power, and the battle has only just begun.

Forced to return home after death takes a member of her family, Jenn discovers that San Francisco is now a vampire stronghold. As a lone hunter apart from her team, Jenn is isolated—and at risk. She craves the company of her fighting partner, Antonio: his protection, his reassurance, his touch. But a relationship with Antonio comes with its own dangers, and the more they share of themselves, the more Jenn stands to lose.

Then Jenn is betrayed by one who was once bound to protect her, causing her to doubt all she has held as true. To survive, Jenn must find the courage to trust herself—and her heart.

Review:
Real vampires, the ones I remember from my childhood stories, sure as heck don't sparkle. That's one thing this book got completely right. This is a vampire-centric story, but with "real" vampires that are actually dangerous and kill people. This book reminded me of a young adult version of True Blood (the show or the books): Vampires come out of the closet and pretend to not be as bad as we assume they are, but secretly take more control than we realize. This book even had a more family-friendly concept of True Blood's "fangbanger" - girls who vow to date vampires rather than human boys.

Anywhoo, there are bands of hunters that keep humanity safe from nests of vampires across the world, and this book follows a team of hunters after they graduate from Sacred Heart Academy in Spain (known as the Salamanca Hunters). Jenn, Antonio, Skye, Holgar, Jamie, and Eriko are all teenagers from different areas of the world that chose to train to become hunters. Better yet, Skye is a witch, Holgar is a werewolf, and Antonio is actually a vampire himself. Who is also in love with Jenn. But manages to control his blood-lust issues around his team. You were waiting for that weren't you? It seems cliche, but this book actually presents the plot quite well, even with the cliche inclusion of supernatural elements in the team itself. The team members are actually very distrustful of each other, I loved it, everyone's slyly thinking the worst of everyone...it's nice not to have everybody so lovey-dovey right off the bat, makes it more realistic.

The book does an excellent job of character development. Each of the 6 main characters gets a chance to have things told from their point of view (including what they think of their teammates), as well as their backstory. This omniscient third person point of view allows the reader to really get to know each of the main 6, and results in extremely well-developed characters. I liked that each character had a distinct personality but each of them were very realistic. I loved Jamie even though he was a bit of a bastard, Holgar is just plain cool, Eriko is determined as befits her leader role, Skye is soft-spoken but not a wimp, Jenn is forever doubting her contributions to the team, and Antonio is the tortured soul (did I mention he's an extremely religious Catholic vampire?).

The plot is very action-filled, especially towards the end; but I felt the plot dragged nonetheless, I think it could've benefitted from being shortened by about a hundred pages, some of the descriptions of secondary plot points were not that necessary.

Recommendation:
If you're looking for a vampire story of the non-sparkly variety that would appeal to guys as well as girls with wonderfully developed characters, read this!

Thoughts on the cover:
Very cool. The black and red colour scheme with Antonio's cross against the gates makes for a great piece of eye-candy.
Posted by Andrea at 2:30 PM