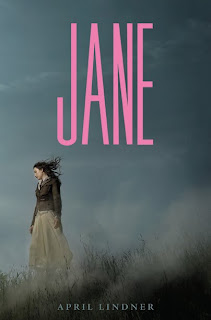 Summary:
From the inside cover:
Forced to drop out of an esteemed East Coast college after the sudden death of her parents, Jane Moore takes a nanny job at Thornfield Park, the estate of Nico Rathburn, a world-famous rock star on the brink of a huge comeback. Practical and independent, Jane reluctantly becomes entranced by her magnetic and brooding employer and finds herself in the midst of a forbidden romance.

But there's a mystery at Thornfield, and Jane's much-envied relationship with Nico is soon tested by an agonizing secret from his past. Torn between her feelings for Nico and his fateful secret, Jane must decide: Does being true to herself mean giving up on true love?

An irresistible romance interwoven with a darkly engrossing mystery, this contemporary retelling of the beloved classic Jane Eyre promises to enchant a new generation of readers.

Review:
As soon as I saw a listing for this book back in the summer and realized it was a modern retelling of Jane Eyre, I knew I had to read it. Jane Eyre is my favourite of the old classics, and it made me so mad that we never got to study it in my university English classes...we had to do the Austen works, which I hated. Yes, I'm a literature major and an English teacher and I'm the first to admit I cannot stand the Austen books for the life of me, but I fell in love with Bronte's Jane Eyre. I've read some very good retellings of classic stories, and they always have a similar feeling about them. In my opinion, a good retelling needs to embody the same kind of spirit that the original story had, just with different details to modernize it or otherwise change it. Jane does that. I remembered what I felt the first time I read Jane Eyre as a kid, and I had the same experience reading Jane.

Jane is an extremely faithful retelling, and all the changes made are appropriate and work well in the modern context of the story. I was actually very impressed with just how well everything worked together. I could tell that the author obviously loved the original story in order to make such a good and proper retelling; and after reading the author's note at the end, turns out she really does. Jane's character is serious and practical, but feisty and fierce in her own way, and that came across really well. Making the Mr. Rochester character (Nico Rathburn) into a rock star was pure genius, it allowed all the class issues and such from the original to work in a modern setting. Rather than take the first portion of the novel to delve into Jane's childhood as the original does, Jane catapults the reader right into her applying at the nanny agency and we see her childhood through flashbacks, usually while talking about one of her family members, which I think works much better than the method taken by the original.

If you've read the original story you'll know how the plot goes, so it won't be much of a surprise, but the beauty is in the details. Jane first encounters Nico after almost running her over in his sports car rather than a horse, Nico pretends to be engaged to a "Bianca" Ingram as opposed to "Blanche" in the original. Jane is as familiar as an old friend, but one that you've been apart from and enjoy reconnecting with.

This is a retelling I could see my students reading. A lot of kids today would like the subject matter of a lot of the older classics but get turned off by the language used and don't end up reading them. That's why I like retellings that are properly done, like Jane. They allow kids to enjoy a story they might not otherwise have read in the original format.

Recommendation:
Stellar and beautiful. Read this whether you're a fan of the original or not, it's one of the best novels I've read this year.

Thoughts on the cover:
Pretty yet haunting too. I like how Jane's eyes are closed and her head slightly off to the side. I also like how she's dressed in what could be modern Victorian style inspired clothing. The grey and hot pink colour scheme works well together, plus the inside cover pages are the same hot pink, a severely under-represented colour.
Posted by Andrea at 3:01 PM