I Am Canada: Blood and Iron - Paul Yee 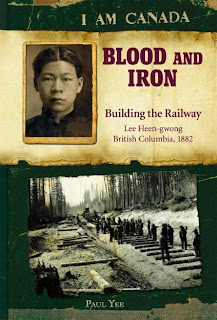 Summary:
From Amazon.ca:
Heen's father and grandfather have brought their family in China to the brink of ruin with their gambling habits. To solve their money troubles, Heen and his father come to Canada to build the railway - a decision plagued by disaster. The living conditions provided for workers are wretched and work on the railway is excruciating. Transporting tons of gravel and working in tunnels about to be dynamited proves to be deadly for many of his co-workers. Soon the friction between the Chinese workers and the whites, who barely acknowledge these deaths, reaches a fevered pitch. As an added stress, Heen's father has found some men to gamble with, which puts all of their earnings at risk. Heen's only solace is his journal, where his chilling observations of the injustice and peril heaped upon the workers serve as an important testament to this dramatic era in Canadian history.

Review:
After stumbling across the Dear Canada series by Scholastic a few years ago when I began teaching, I thought it was the greatest thing to hit history classes. Modeled after the Dear America and I Am America series by Scholastic in the States, the Dear Canada series are a series of various diaries written by fictional female characters from different periods in Canada's history. I have several of them and recommend them to my students that have a hard time with grasping the point of why we study history. The Dear Canada series covers various topics through the experiences of their young girls: the Halifax explosion of 1917, the escape of slaves from the US to Canada via the Underground Railroad in the mid 1800s, the Influenza Epidemic of 1918, the experience of Chinese immigrants in the early 20th century, the internment of Ukrainians in WWI, and the Filles-du-Roi experience in the 1600s, among others. The only thing I lamented was that there wasn't a similar series focusing on male characters in Canadian history like the I Am America series in the States, since lots of boys won't read books where a girl is the main character. Well, I finally got my wish.

The I Am Canada series just debuted this year with two titles: Blood and Iron, and Prisoner of Dieppe. The first thing I thought of when I heard this series was finally coming out was, "oh man, it's just going to be all World War I and II stories with nothing else like half the other historical fiction series for boys out there." Thankfully, based on future releases as well as the two current ones, there appears to be choices other than the typical World War fare, hence why I chose to read Blood and Iron, about the experience of Chinese immigrants building the Canadian Pacific Railway in the late 1800s. It's an issue a lot of kids today aren't really aware of unless they pay attention in history class, so I'm glad this period of history was included for this series.

On to the book itself. The author does a wonderful job of showing the dangers Chinese men experience building the railroad in BC, so the actual history of the issue comes across nicely. In terms of making a good story to go along with that history however, the book falls short. A lot of descriptions about anything except the injuries and working conditions are missing, you would barely know the characters are even in BC as opposed to somewhere else. There are a ton of secondary characters that are named and pop up every now and then but they never receive any character development, they are just around to be injured or killed and that's that. You never really get to know Heen much either, his journals don't really delve into himself as a person, so you don't feel a lot of connection to him other than the horror of the injuries and working conditions around him. This problem happens in the Dear Canada books too, the history comes across wonderfully but there isn't a good story to accompany it to make you really enjoy the book as a piece of historical fiction rather than as just a pretend diary written for an insert into a 13-year-old's history textbook. Each book from both of these series is written by a different Canadian author (some authors write multiple books), so there are some authors that do these books justice more than others, and when you read enough of them, you know which ones are worth picking up if you want more than just a diary about the historical experiences. Keep in mind, I'm saying this from the point of view of an adult female reader that likes character development in her novels...a lot of boys that this series is targeting could care less if you knew anything beyond the character's name so long as the thing is action-packed, which this book delivers on. So most tween/teen boys will probably eat these books up, but I'll be on the lookout to see if any of the current and future releases in this series are well-written as well as historically informative, both for myself and for boys with possibly more discerning tastes in their books.

Recommendation:
Thumbs up for exploration of an issue that is rarely explored in Canadian historical fiction novels for children. Thumbs down for bad writing. Most boys will still read this and love it regardless of the writing issue though.

Thoughts on the cover:
Whereas the Dear Canada books featured a ribbon banner with a central portrait of the girl in question, the I Am Canada covers are a little more dynamic. You have the photo of the boy in question in the upper left, the title to the upper right, with an action shot photo across the bottom. The borders and edging gives it the look of an old notebook that's "been through the war" so to speak, so there's no sissy diary insinuations that can made for this series.
Posted by Andrea at 12:13 PM