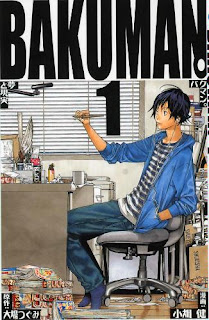 Is becoming a successful manga artist an achievable dream or just one big gamble?

Average student Moritaka Mashiro enjoys drawing for fun. When his classmate and aspiring writer Akito Takagi discovers his talent, he begs Moritaka to team up with him as a manga-creating duo. But what exactly does it take to make it in the manga-publishing world? Moritaka is hesitant to seriously consider Akito's proposal because he knows how difficult reaching the professional level can be. Still, encouragement from persistant Akito and motivation from his crush push Moritaka to test his limits.

Review:
I don't read as much manga (or graphic novels in general) as I used to. There used to be about 10 series I was following, but then a combination of being out of the loop and realizing that with manga, like many things in life, "90% of everything is crap", I didn't read as much. This series was profiled in the English version of Shonen Jump magazine, which I have no idea why I still read since I hate half the titles in it, but this series caught my eye.

Moritaka Mashiro is in grade 9 and has a talent for art and drawing, but has since given up his dream of being a manga artist since his uncle (an unsuccessful manga artist) passed away years ago. He's resigned himself to study hard, get into a good high school and college and just be an ordinary businessman like the majority of all other Japanese males. One day, Akito, one of the smartest guys in the school, comes to him with a proposition: they team up to create manga, Moritaka doing the art and Akito doing the writing. Moritaka is reluctant considering he learned everything about the manga industry from his late uncle, and he knows how hard it is to make a living off drawing manga. Akito then drags him to the house of the girl Moritaka has a crush on and confesses to her that the two of them are going to be manga creators, and that Akito thought she would want to know since he found out that she wants to be a voice actress. Moritaka, in his love-induced shock at finding out this girl he secretly loves wants to pursue an unrealistic career like he secretly wants to, asks Miho if she wants to do a voice in the chance that their manga gets animated. He then follows up with a marriage proposal if both of them achieve their respective dreams. She agrees. So motivated by the premise of true love and marriage to his dream girl if he can only become a manga artist, Moritaka and Akito go about writing stories, doing storyboards, and working like dogs in general to get a finished preview dropped off to major manga publishers.

This series is uber cheesy like most manga, the young protagonists pursuing their dreams and an agreement to eventual marriage by a cute girl seals the deal. But it's kinda refreshing too, it's a slice of life series rather than a typical boys series: swords, fighting, and magic powers. It's kind of educational too, I learned a lot about the manga industry that I hadn't known before. And since the author/creator of this series know what they're talking about (they wrote and drew Death Note), I'm inclined to trust the info here. Since the boys in the story take the roles of writer and artist just like the creators of the manga itself, it has the whole "story about a story" vibe.

There's one thing about this manga I dislike, but there's a few things you should understand first. This was originally created in Japan as a boy's manga, so it was serialized in a manga magazine (Shonen Jump) targeted at boys but also read by girls. Japan is still pretty backward when it comes to gender roles: girls are generally taught to finish school to go work in a company, but then are expected to get married by their mid twenties and stop working to stay home and do the stereotypical female stuff like raising a family. It's acceptable for women to return to work after their children are grown, so many women miss 25+ years in the workplace because of that. In chapter 2 in this volume, the boys get into a discussion about what makes a person dumb or smart. Akito says he thinks Miho is smarter than him even though her marks are average. Akito then tells Moritaka that since Miho is a girl she knows that she must be polite and graceful without being too smart or showing off, because she knows that as a girl its best to get married and be somebody's wife and she won't land a husband/be popular with boys if she's too outwardly smart. He says because she knows this instinctively and goes about these things effortlessly, it makes her smarter than the girl in the class that gets the best grades and takes pride in it. Although this mindset is common in Japan and it's accepted there and girls actually do do the things Akito talks about, it's not the same here. Although there are some boys that don't want to date/marry girls who are smarter than them or smart at all, there are plenty of people that are the opposite. I just think that this leads to one of those patented "teaching moments" for both boys and girls. Ask your kids what they think of Akito's comments and whether they think that girls who get good grades are somehow diminishing their dating prospects. To give my own little backstory: there were plenty of girls I went to school with who deliberately did poorly in school because they wanted to be popular with boys. I on the other hand was competitive and wanted to get better grades than the boys I went to school with, and my parents were fine with that. Thankfully I went to university and there were plenty of guys who wanted to end up with a woman they could have a serious conversation with, including my husband, hence why this little gender episode irks me just a tad...

Recommendation:
I really like this series, it's fun, different than the usual shonen fare, plus it's about manga itself. Use the little gender stereotype bit in chapter two to have a conversation about attitudes towards gender in different countries.

Thoughts on the cover:
The English cover is the same as the original Japanese cover, though I like the slight difference in the title font that the English cover uses (note: cover image for this review is of the Japanese cover since it's the only decent picture I could find).
Posted by Andrea at 12:03 PM