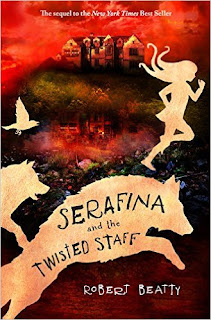 Serafina's defeat of the man in the black cloak has brought her out of the shadows and into the daylight realm of her home, Biltmore Estate. Every night she visits her mother in the forest, eager to learn the ways of the catamount. But Serafina finds herself caught between her two worlds: she's too wild for Biltmore's beautifully dressed ladies and formal customs, and too human to fully join her kin.

Late one night, Serafina encounters a strange and terrifying figure in the forest, and is attacked by the vicious wolfhounds that seem to be under his control. Even worse, she's convinced that the stranger was not alone, that he has sent his accomplice into Biltmore in disguise.

Someone is wreaking havoc at the estate. A mysterious series of attacks test Serafina's role as Biltmore's protector, culminating in a tragedy that tears Serafina's best friend and only ally, Braeden Vanderbilt, from her side. Heartbroken, she flees.

Deep in the forest, Serafina comes face-to-face with the evil infecting Biltmore - and discovers its reach is far greater than she'd ever imagined. All the humans and creatures of the Blur Ridge Mountains are in terrible danger. For Serafina to defeat this new evil before it engulfs her beloved home, she must search deep inside herself to embrace the destiny that has always awaited her.

Review:
After reading Serafina and the Black Cloak last year, I fell in love with it and was excited when I heard the author was planning a sequel. While I enjoyed the first book more in terms of plot, this second installment has all of the same great characters and writing style that I enjoyed in the first.

Taking place three weeks after the conclusion of the first book, readers see Serafina persist in her efforts to understand her newfound identity as a catamount and also try to gain acceptance from those at Biltmore. When Serafina is out visiting her mother in the woods and comes across strange man and a pack of wolfhounds that attack her, she knows that something is horribly wrong. When she finds another strange man visiting Biltmore, she thinks the events are linked. When she notices the animals acting out of character, including Braeden's dog Gideon, she is in fear for everyone at Biltmore. With the help of Braeden and Waysa (a catamount with ties to her mother), Serafina investigates the events at Biltmore to try to save it once again.

This installment wasn't quite as satisfying in terms of plot, it was more predictable and not as wow-inducing as the first. The characters are back with a bang though, Serafina is still wonderful, and we get to see some major development regarding both her and Braeden's characters. Waysa was a nice addition too, and a great point of internal conflict for Serafina to decide whether to remain at Biltmore or go off with the other catamounts.

Recommendation:
Not as good as the first in my opinion, but still worth the read.

Thoughts on the cover:
Some nice continuation from the first cover, this time in a warmer colour scheme with the animal silhouettes accompanying Serafina's.