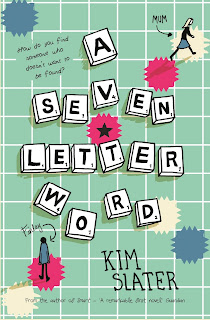 Scrabble genius Finlay McIntosh is a different lad to the one his mother left behind. One day she was there, the next she was gone. And his dad won't even mention her name. All Finlay has to remember her by is a bag of letter tiles and an empty journal.

Then a chance remark by a mysterious new player he meets online changes everything. Has he stumbled on to a major clue that could help him find his missing mother? Finlay will do whatever it takes to find out the truth. But can he find his voice...before it's too late?

Review:
Finlay is fourteen and its been two years since his mother left. His father moved the family to Nottingham and Finlay has to deal with a new school, just as his stuttering has worsened. He is bullied by Oliver at school during the day and copes by playing Scrabble online in the evenings while his dad is working. When a new online player named Alex mentions a stepmother that left her family, Finlay suspects that his mother could be connected. When he is asked by a teacher to join the school Scrabble club and potentially represent the school during a competition, Finlay thinks its another way to somehow make himself known to his mother.

This was really intriguing story with a sympathetic set of characters. Finlay is a kid who really can't catch a break: his mother left, his dad is trying his best but isn't coping well,  and he gets picked on for stuttering. Maryam is probably the best aspect of the whole book, a Muslim girl at Finlay's school who helps him with his Scrabble skills. She is bullied for wearing a hijab and for being a foreigner in Britain, so not only do we have a diverse character (something we need more of in children's books), but we actually get to see an unfortunately common occurence that their real-life counterparts experience.

This was a relatively quick read and the plot twist involving the mother was relatively easy to ascertain, but still worth the read.

Recommendation:
An intriguing read with some amazing characters.

Thoughts on the cover:
I appreciate how the Scrabble elements were added to the cover, it makes for a nice touch.
Posted by Andrea at 12:56 PM