The Queen of Bright and Shiny Things - Ann Aguirre 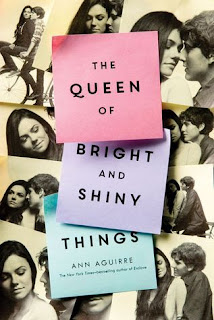 Sage Czinski is trying really hard to be perfect. If she manages it, people won't peer beyond the surface or ask hard questions about her past. She's learned to substitute causes for relationships, and it's been working just fine...until Shane Cavendish strolls into her math class. He's a little antisocial, a lot beautiful, and everything she never knew she always wanted.

Shane just wants to be left alone to play guitar and work on his music. He's got  heartbreak and loneliness in his rearview mirror, and this new school represents his last chance. He doesn't expect to be happy; he only wants to graduate and move on. Though he never counted on a girl like Sage.

But love doesn't mend all broken things, and sometimes, life has to fall apart before it can be put back together again.

Review:
I picked this up purely for the title, I won't lie.

Sage is sixteen and trying hard to be as good as possible so her aunt won't be tempted to send her back to a group home or foster care. Since moving in with her aunt Gabby three years ago, Sage has managed to project a completely different persona than she was during her difficult past. No one would guess that the "Post-It Princess" that leaves encouraging notes for people on their lockers would have the kind of record Sage has. She does a pretty good job at it, though at the expense of a well-rounded social life. When her best friend betrays her and she meets Shane for the first time, it sets off an effect that allows Sage to blossom. Her grades improve through Shane's tutoring, she forgives her friend Ryan, and she makes more friends and actually socializes. Sage is incredibly happy, until she stands up against a bully and both parties threaten to expose secrets about the other. When everything is falling down around them, will Sage and Shane survive?

Sage is incredible as a character, she's very down-to-earth and realistic with her troubled background, but still adorable and quirky that you can't help falling in love with her. Shane is troubled too, but easily opens up to Sage and allows her influence to soften his edge. Their relationship together is really quite sweet and almost gave me cavities, but it's quite a good model for a teenage relationship: They communicate and compromise, are caring and considerate of each other, and really are each other's rock in everything. Most of the book is purely character-driven, with Sage and Shane at the wheel, so if you get hooked on these two, you'll have a great ride. The writing is well done, the supporting characters are great as well with good personalities, and the author did a really good job with Sage and Shane's back stories, I was almost on the verge of crying when everything unraveled.

Recommendation:
An coming-of-age romance that is just amazingly awesome, you need to read this...right now.

Thoughts on the cover:
I love how they incorporated Sage's trademark post-it notes into the cover, and the black and white pics of Sage and Shane are a nice added touch.
Posted by Andrea at 2:11 PM