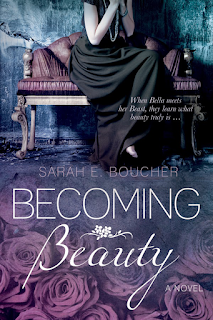 Self-centered Bella focuses her attention on beautiful dresses and fabulous balls rather than helping her family earn a living. And her siblings have finally had enough! To pay off their father's debt, they send Bella to a far-off castle where the owner is more like a beast than a man.

As their personalities clash, Bella comes to realize that there's more to the Beast than she could have ever dreamed - if she's willing to look beneath the surface. And then there's Jack, the kind servant who helped Bella adjust to her new life, someone Bella could easily fall in love with. But pursuing true love may cost Bella her dreams of wealth and beauty. And that's not a price she's willing to pay.

Becoming Beauty is an imaginative retelling of the classic fairy tale that's sure to entertain readers of all ages.

Review:
I'm a sucker for all things Beauty and the Beast, so when I saw this new retelling, I had to pick it up. There are a lot of parallels to the original tale, but with quite a few unique twists.

Bella is not what you'd expect as the "Beauty", she's spoiled and manipulative, but also clever and refuses to be ordered around. When her requests for shiny, pretty things lands her father in debt to a beastly sort of man, her siblings force her to return as a servant in their father's place. The "Beast" as Bella calls him is surly and berates Bella in her role as his scullery maid. After Jack convinces Bella not to run away, Bella encourages the Beast to recover from his grief. As the three spend time together, the Beast (later known as Philip) falls in love with Bella, while Bella falls in love with Jack. All this while Bella has dreams of a girl named Rosalind who is connected to both Philip and Jack.

I was not a big fan of Bella at first, she's not the type of character I root for, but she does feel guilt over her actions and goes fairly willingly to the castle, so she does have some redeeming qualities. Philip is fleshed out fairly well as a character, as is Jack, but the relationship aspect left me hanging a bit. I thought Bella and Jack's relationship wasn't explored enough to be believable, but Bella and Philip's was done quite well. There were some parts that had me laughing so hard, particularly the section where Bella tries to get Philip back into regular hygiene practices and has to clip his fingernails, toenails, and matted hair with hedge clippers. The writing is generally great, and the interactions between the characters were well done and quite witty. I like how the author wrapped everything up in the end, it's a very sweet ending (not saying more for fear of spoilers).

Recommendation:
A very quick retelling of Beauty and the Beast but quite satisfying.

Thoughts on the cover:
I like how Bella is posed on the settee against the decrepit background.
Posted by Andrea at 8:30 PM