I Am Princess X - Cherie Priest 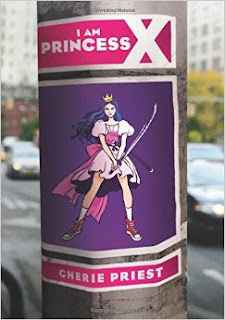 Once upon a time, two best friends created a princess together. Libby drew the comics, May wrote the stories, and Princess X fought monsters, ghosts, and other assorted creepazoids from her haunted house high on a hill.

Once upon a few years later, Libby was in the car with her mom driving across a bridge on a rainy night. When the car went over the side, Libby passed away, and Princess X died with her.

Once upon a now, May is sixteen and lonely when she sees a sticker slapped in a corner window - a figure in a gold crown, pink dress, red Chucks, and a long katana sword...

Princess X? Suddenly, May sees the princess everywhere: stickers, patches, graffiti - an entire underground world built around a webcomic at IAmPrincessX.com. The more May explores the comic, the more shocking connections she finds between Libby's death and Princess X's adventures. And that means that only one person could have started this phenomenon - her best friend, Libby, who lives.

Illustrated throughout with the Princess X webcomic, I Am Princess X is a mystery, wrapped in a friendship story, bound up with a cyberthriller...and all-around awesome.

Review:
I picked this up based on the premise and the cover. The book didn't quite end up being what I expected, but that's not really a bad thing.

Libby and May became best friends when they were ten due to boredom. The result of their creative collaboration was Princess X. Throughout middle school they continued to work on their stories and comics, until Libby and her mother were in a car accident. Though Libby's body was eventually found (washed ashore and unrecognizable), May always hoped Libby had somehow survived. Years later, the summer before May turns seventeen, she notices a faded sticker near one of her favourite hang-outs and the image on it is of Princess X. After discovering that Princess X has a cult following, May pores over the websites dedicated to the webcomic. After reading the actual comic, she can't help but feel it includes references to things only she and Libby would have known, and after finding out Libby and her mother's car accident was really a homocide, May is determined to find answers. She gets in contact with a computer hacker named Patrick ("Trick") who helps her navigate the clues in the Princess X webcomic to try and discover what really happened to Libby.

The premise of the story is really promising, it's a cool mystery and a thriller with geek culture thrown in. The whole idea of a childhood creation coming back to you years later to relay information about the whereabouts of a friend is spine-tinglingly awesome. Granted, some details aren't quite plausible: that police wouldn't have had Libby's washed up "body" identified through DNA before declaring her dead, and that a high school hacker could navigate complex online security systems that somehow eluded police detection. The writing isn't as sophisticated as I would have assumed, it reads more like a middle-grade novel as opposed to YA, but that's not a huge detriment in my opinion.

The webcomic pages inserted throughout the book are a nice touch that enhance the story. I really enjoyed the whole "scavenger hunt" where May and Patrick follow the clues in the comic using knowledge only May would know about Libby to uncover what happened to her. It was a fun little ride, even if some of the details weren't realistic.

Recommendation:
A fun mystery/thriller about solving a murder via a webcomic, it's worth the read.

Thoughts on the cover:
I like how the cover is recreating the image of the sticker and how May found it, very appropriate.
Posted by Andrea at 3:28 PM