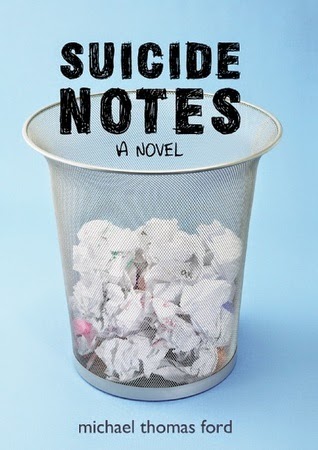 Fifteen-year-old Jeff wakes up on New Year's Day to find himself in the hospital. Make that the psychiatric ward. With the nutjobs. Never mind the bandages on his wrists, clearly this is all a huge mistake. Jeff is perfectly fine, perfectly normal - not like the other kids in the hospital with him. They've got problems. But a funny thing happens as Jeff's forty-five-day sentence drags on: the crazies start to seem less crazy...

Compelling, witty, and refreshingly real, Suicide Notes is a darkly comic novel that examines that fuzzy line between "normal" and the rest of us.

Review:
I picked this up solely because of the title and the synopsis. This turned out to be an incredible book about a boy who goes off the deep end, and his struggle to come to terms with exactly why he attempted to end his own life. For those who are trigger-sensitive, major triggers ahead.

Jeff wakes up in the youth psychiatric ward after trying to slit his wrists. He is informed by his new doctor that he will be there for a 45 day program to try to help him. At first he is incredibly reluctant, but then slowly starts to open up to the other teenagers with him in the program and starts to accept that he did indeed try to commit suicide and what exactly drove him to do it. There's a lot I can't delve into for fear of spoilers, but let's just say it deals with a subsection of youth that are at a high risk for suicide and self-harm. A warning though, this book can get pretty graphic at times: graphic depictions/memories of suicide as well as sexual acts, so sensitive or younger readers will want to avoid this.

Recommendation:
An excellent book about mental health and suicide and what can drive a person to make that decision. Well-written, realistic characters with a wonderful story, but depictions of sex and suicide, so a warning there.

Thoughts on the cover:
Interesting choice but very appropriate.
Posted by Andrea at 12:16 PM